Tales from the Script

This evening we’ll be discussing our process in transferring the epic into a completely different medium. In short, it’s a lot of work. So if you’re interested in how we’re looking to tackle this beast narratively, read on!

Disclaimer:
All of the examples you see are WIP (work in progress) and thus subject to change. This project will be going on for a long while and we’re all capable of changing our minds if presented with better technology and/or ideas.

Warning:
If you haven’t read the fic, stuff’s gonna get spoiled for plot examples.

As we mentioned in the first fortnightly post, we’re hard at work dissecting the fic to bring the Fo:E story to life. For someone who hasn’t read the fic in the least, there will be the option to basically play the “LittlePip playthrough,” and see the story like it was originally told in the fic. For those who wish to deviate, we have added a number of different options and play styles, essentially creating what we like to call: Pure Fallout Ambrosia.

Although this is a Fallout narrative, let’s face facts, the fic is primarily driven by decisions stemming from inner monologue in our fearless hero’s head. The challenge presented to us in this aspect is how in the seven hells do we create compelling narrative, with dynamic Fallout-y choices, when it’s just the character saying this is the right thing to do. This is a hard question to answer. In Fallout, the character is presented with a moral conundrum and if you’re playing an evil character, or “DickPip”, you’re not going to save people as much as you’re going to kill them. 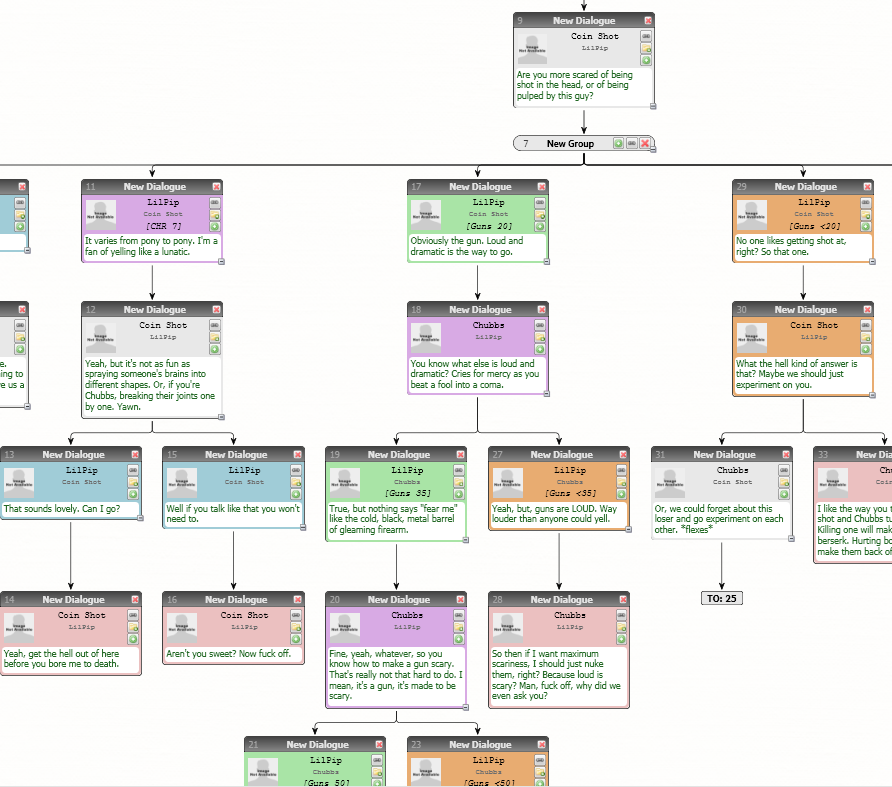 A lot of our work is thinking about where Pip’s decisions fall within the moral spectrum, then fill in the blanks. For example, Pip leaves the Stable because she has a crush on Velvet and wants to go find her. This is a personal motivation of LittlePip that we can’t just drop into the Pipbuck without saying “you like this character now, live with it.” By limiting the possible motivations to only those found in the story, we would also be limiting the ways players can write their own story with.

Through countless hours of study through Fallouts 2, 3, and New Vegas, I think we here at script team can clearly make a refined statement about the composition of Fallout dialogue trees.

They seem to be based on menus.

For good reason! You have a ton of options, all which lead to branching, roleplay-friendly options. And they’re roleplay friendly in such a lovely way! You have positive and negative reactions, but all the options are just neutral-sounding enough so that your own feelings and reactions can easily be slotted into a simple, three-emotion dynamic.

And you are allowed the option to opt out, or re-click options to get the exposition again. And often the answers are intuitive enough to come up with all kinds of questions the player might want to ask, or point out. It’s a very open, sprawling system that can get out of hand easily, but is very satisfying when written to completion. 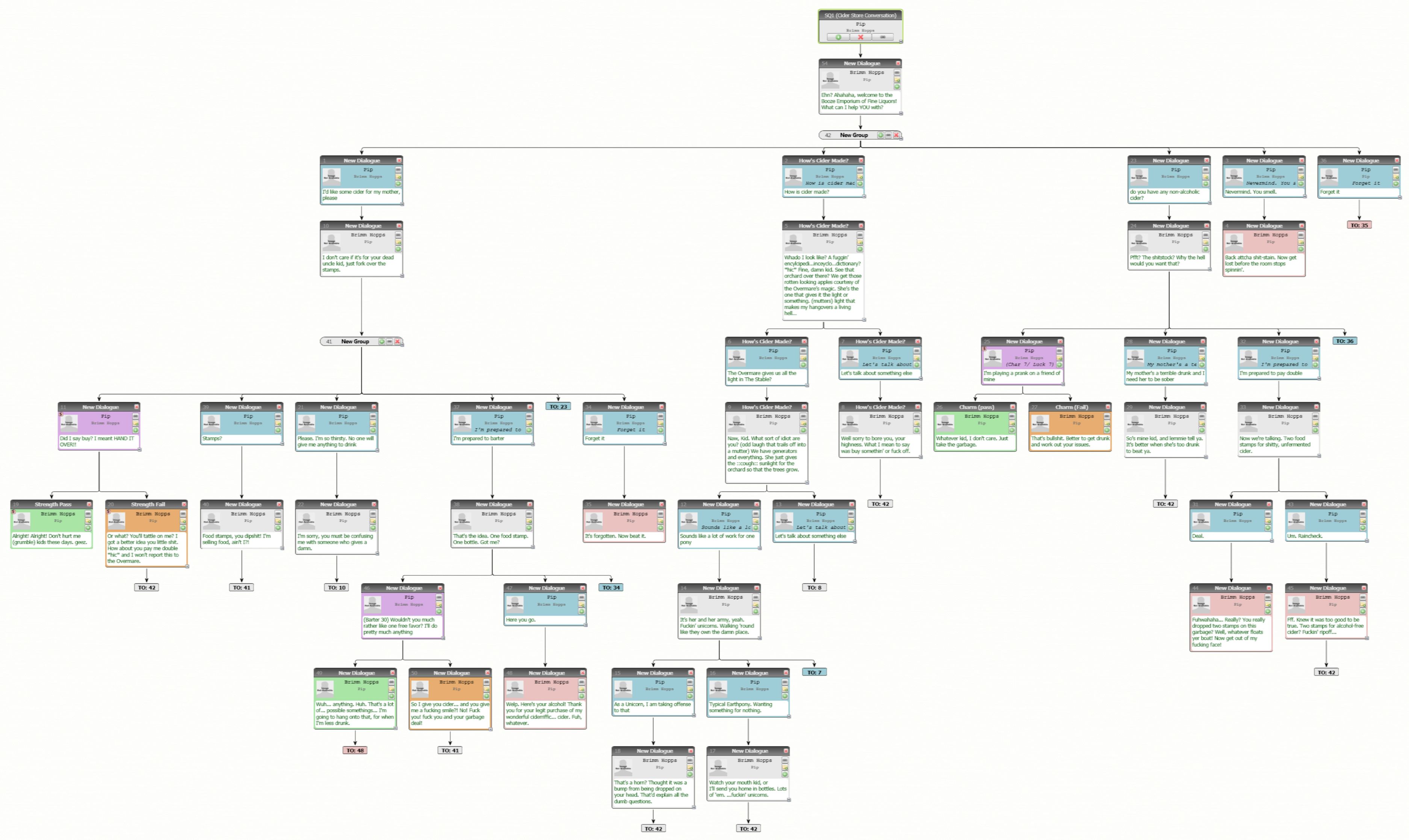 This is one of the simpler trees that we’ve constructed, basically existing to wrangle some booze out of the local brewer. But even with such a simple objective, we’ve allowed for a number of questions, options, and expositions.

But sometimes, a tree isn’t about exposition. Sometimes, you don’t have time to ask all the questions. Sometimes, somebody’s bitching at you, and you need to react. I mean that there are some conversations that follow a more natural flow, basically being one way. Like something you’d read that one Visual Novel. 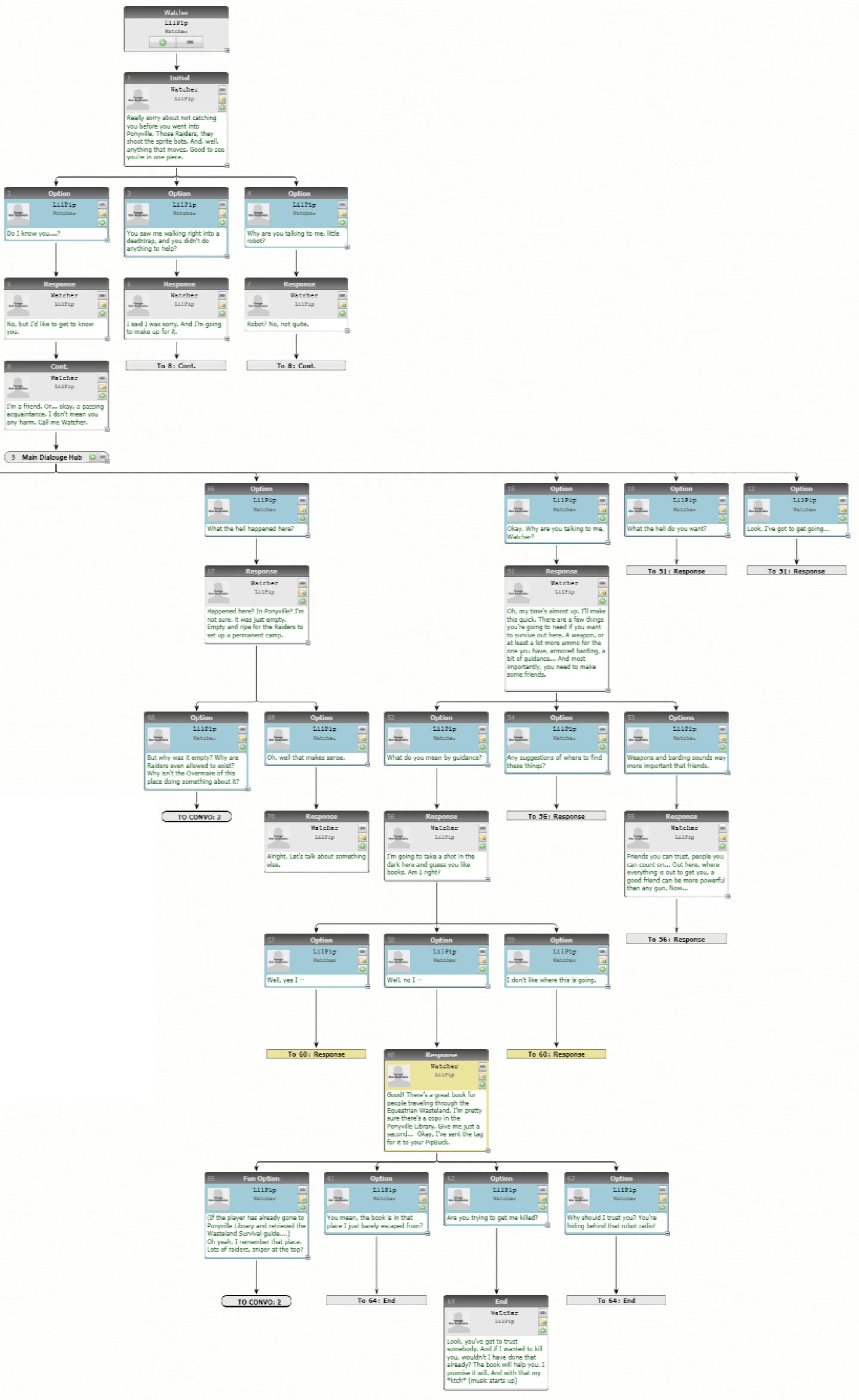 This is a conversation the player can have with Watcher. He has a limited time to spend talking to you. There’s many ways to move through the tree, but it’s all flowing in one direction, mimicking a straightforward conversation.

Are you the kind of person who loves the Speech skill? Are you overjoyed when you can go through an entire quest without firing a single shot? Were you giddy when you talked President Eden into self-destructing? Were you absolutely thrilled when you convinced the Legate Lanius that fighting the NCR will weaken the Legion?

Well then don’t worry! Script Team has got you covered.

Dialogue in most Fallout games has been the domain of the speech-skilled character. And it still is. There’s a great game to be had, given the ability to talk your way through most situation. However, we here in Script Central thought that those powers might be expanded. Why should Speech characters have all the fun? Occasionally you’d run into the ability to apply other skills in a tree. Maybe barter. Maybe Medicine. If the game was being silly, you could get a Luck check, and substitute half an hour’s hard work with two words and a nice smile.

We want to expand on those basics. If you’ve invested good points into a character, you should be able to use it to make your way through all of the wasteland. Including the complicated landscape of dialogue.

Four Perfectly Good Balefire Eggs, All In a Row ~ Terminals, Banter, and STABBINGS

So, we here at script team do more than make lovely looking word bonsai. We also do terminals, NPC Banter, and the voice stabs of random
pedestrians! And determine the plot, but that’s harder to show off in neat little paragraphs.

In this final sections, I’d like to show some items from our team members that we’re really proud of. Enjoy!