Another Design post, this time we are going to be sharing some of the foundations of the game; Skills and Attributes!
Most of you who have played Fallout know a fair bit about the attributes, skills, and levels that form the basic systems of the game. In our case we have adapted and modified the systems found in Fallout 3 and New Vegas to help improve gameplay.

While most of the S.P.E.C.I.A.Ls are remaining the way they were in Bethesda and Obsidians games, we did have to modify Intelligence and Charisma in order to balance the system. 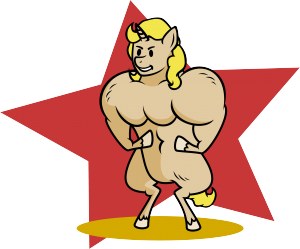 In Fallout series, Intelligence controlled the amount of skill points the player would receive upon level up. However, with skill level controlling almost everything having to do with player character progression, this presented the issue of making the attribute too important compared to the other attributes.

In order to correct this issue we have decided to modify the attribute in question a bit; upon level up players will now always receive 13 skill points regardless of their Intelligence, and instead Intelligence will now affect experience gain and certain skills' initial level. Lover of intellect don’t fear, it has another use as well, as we have decided to tie Intelligence into the magic system, where it will effect spell potency and the amount of spells the player can have. Look for details about our magic system in an upcoming post!

Funny enough Charisma was the opposite of Intelligence, being far too weak in comparison to the other attributes. Because of the limitations of computers, it’s hard to have the incredibly complex social systems that Charisma would need in order to be strong. In Fallout 3 and New Vegas Charisma was used only for the Speech and Barter skills, and occasional conversations, making all of the other attributes generally better.

Fallout Equestria traditionally has a theme of friendship, so we decided to bring Charisma up to par with the other attributes. Charisma is going to be tied into our complex Companion system. Like Intelligence will affect a players experience, Charisma will affect your companions' experience. Charisma will furthermore augment their nerve, making them less likely to flee as your leadership keeps your companions together through bad times. So the social player who wants to roleplay a wandering merchant with bodyguards is covered.

Perception needed few changes, since in the Fallouts it regulated how far players sensed allies and enemies. What is currently planned is that Perception will also affect Depth of Field and some visual effects. However these possibly additions have not yet been tested, and as such are subject to change.

Some of the other S.P.E.C.I.A.Ls have had no changes from when they were in Fallout 3 and New Vegas, but for those of you who have not played those here is a brief summary of each attribute and what they do.

Endurance is how hardy player’s body is. This attribute is vital as it governs the players hitpoints and stamina, as well as strongly affecting the player's natural healing rate and their resistance to poison, radiation, and disease.

Agility represents the player's natural dexterity and hand-eye coordination. This primarily affects player’s Action Points in S.A.T.S. as well as the player's draw/holster and reload speeds. This will be critical for gunslinger-like characters, and most who visit the Equestrian Wasteland will find this attribute extremely useful.

Luck has its' dirty hand in everything, affecting all of the player's skills. By far the most noticeable effect is how it directly correlates to weapon critical chances. Luckier characters will find a surprising amount of their attacks hit vital area’s, while unlucky characters will almost never ‘get lucky’.

We have added a few skills, but by large the majority of the skills are the same as in Fallout 3 and New Vegas. But as we strive for the best game possible, we are making minor changes and additions to these as well.

The most drastic of these is we are adding 2 new skills that have a place in the world of Fallout Equestria, a skill governing Magic and a skill, Shamanism, that governs potion making, and survival in nature.

Magic (Intelligence) is one of the most complex skills, with a special system of mechanics that should prove to feel unique compared to other games that contain spellcraft. A later post will dive into magic system more deeply, but what we can tell you now is that magic starts out broad, with a character's Intelligence determining how many spells they can learn. But those of you who aren't planning to make an egghead character don't need to worry either; each spell can be upgraded and customized separately, allowing different styled characters access extremely different suites of magical abilities. Masters of this skill will feel not unlike Twilight Sparkle, where magic let’s them do amazing feats. 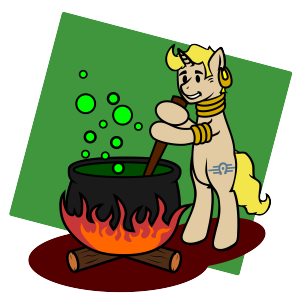 Shamanism (Endurance), is more of a non-combat skill, its' primary function is to govern magical crafting, such as crafting gems, potions, and even enchanted bullets. Focusing in Shamanism will also give the player access to information about animals on the HUD. Players who specialize in Shamanism will end up feeling like druid or magic crafters, with knowledge of animals like Fluttershy, and the ability to creating supplies of mystic items like Zecora.

Several other skills will see significant additions due to new mechanics; Mechanics, Medicine, Science, Speech, and Barter all have new uses.

The most interesting addition is that the information that the user interface gives the player about the various fauna dwelling within the Equestrian Wasteland. In Shamanism we mentioned that it would govern what information the player sees on animals, but several other skill do the same thing for other enemy types.

In addition these skills will have an effect in our heavily expanded crafting system, making it possible for the player to craft many different items in the game depending on their skills, as we want to give the player as much crafting freedom as possible. This system will be detailed further in a later post.

Speech (Charisma) affects all dialogue. It will functionally appear similar to the Skyrim system, but the main visual difference is that the player will be able to move while in conversation with someone. However, moving too far away will end the conversation, so you won't be continue talking to someone who is on the other side of the town.

The other major difference will be that speech challenges, and similar challenges based off other skills, will not tell the player the exact skill level required to pass the challenge; only after selecting the dialogue option in question will they know if they were succesful or not. However, this also does not mean we are taking Fallout 3's approach with randomized checks. All of the challenges will have pre-determined requirements in order to pass them, the player will simply not be told those requirements before hand. This has been done to create more immersive dialogue, so the player chooses things they think their character will reasonably know, and still have a chance of overstepping their skill and accidently diving into hot water. Our intention is to make speech feel less mechanical, so that a character that focuses on Speech still have risks that they have to deal with. 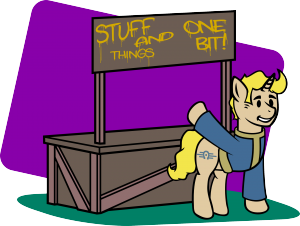 Barter (Charisma), the last skill to get noticeable modifications. Barter governs buying and selling items across the wasteland. In Fallout 3 and New Vegas, this was the only major thing to affect the prices of goods. In Fallout Equestria we are adding more modifiers, both positive and negative, that will assist or hinder the player depending on their situation.

Faction Reputation: The reputation the player has with any given faction will play a role; selling to a town or organization that likes the player will give more opportune prices than those groups that dislike the player.

Karma: The player's… AND the merchants' Karma will both affect the price of goods.

The Merchants' Karma also comes into play when dealing with stolen goods; Good Karma merchants will rarely deal in such things, but shady merchants, will be willing to buy such things, and depending on how shady or borderline criminal they are, they might even pay a fair value. This is mainly because the Good Karma merchants have to keep their good name to allow them to do business in secure faction controlled area’s, while the Bad Karma merchants either don’t care, or operate alongside more… disreputable factions.

Type: Outside of general good stores each merchant has a type of good they specialize in; selling grenades to the food merchant will net you half as much as selling them to an arms dealer (With the notable exception of the “Apples and Dynamite” merchant.) So it’s in the player's best interest to sell specific types of items to the correct type of store. This modifier also comes into play when a town is deprived of a good, or has a surplus it. This allows players to act as great merchants, searching the Equestrian Wasteland for goods that towns need to make a significant profit.

Magic Energy Weapon, Explosives, Lockpick, Firearms, Melee Weapons, Sneak, and Unarmed Weapons work almost identically to how they worked in Fallout 3 and New Vegas. For players who have not played these games we will give a brief summary on how these skills work. 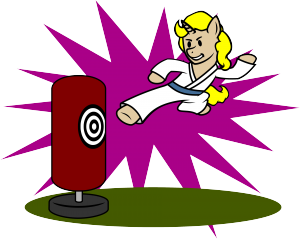 The weapon skills Magic Energy Weapons, Firearms, Melee Weapons, and Unarmed Weapons, all work the same way, making the player better at using the weapons that they wield. As the player increases each of these skills their accuracy and damage will increase, making the player better at fighting with that category of weapons. The most noticeable effect will be that in S.A.T.S. the player's chance to hit each limb/part will increase alongside the skill. It’s notable that the Big Guns skill has been rolled into the other weapons skills the same as in New Vegas, and does not exist as its' own skill.

Explosives - This skill will primarily affect grenades and mines, as well as certain heavy weapons such as missile and grenade launchers. Like the other weapon skills this causes them to do more damage, and become more accurate. The largest difference is that Explosives also governs disarming and arming set explosives in the world. This skill will be useful as the Equestrian Wasteland is littered with dozens and dozens of traps that only a skilled demolitionist can disable.

Lockpick - Lockpick governs the difficulty of the lockpicking minigame, and through it how difficult the locked boxes strewn around are to unlock. Depending on how high this skill is some boxes might not even be possible to unlock. For the hoarder this skill is very important, as your fellow residents of the wasteland use locks to protect their most valuable gear. 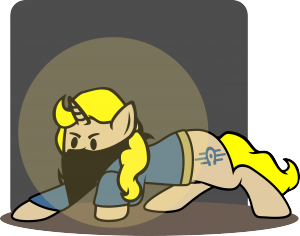 Sneak - If your character wants to be a ghost, unseen and unknown to the wasteland this is the skill for you. We are implementing large changes to the stealth system, but how the skill itself functions will mostly be no different. Sneak skill affects how well your character interacts with enemy detection ranges and how much sound you make. Players will find that they can always attempt to sneak past guards, but with a high Sneak skill moving close and taking risks will be much more viable. Pickpocketing is also governed by Sneak; it will be easier to rob people when you are highly skilled in the art of stealth.

That’s all for this post on Skills and Attributes, but keep an eye out for the post on the Magic(!) system that will be the next post the Design team delivers. We hope this taste into the game's underlying mechanics whets some appetites.

As a reminder to everyone, our PipBuck Art Contest is still ongoing! Even if you aren't the most artistic person around, we still appreciate all of your ideas and effort, so don't be afraid to give it a shot! Just remember to read the rules before submitting, and you will be fine!