When the team first sat down to start designing a base design for mouth-held firearms we immediately knew we had a difficult task ahead. How firearms work in the MLP universe has always been up for debate among fans, and there have been some very interesting ideas thrown around. However, turning a gun onto its side, gangster style, and shoving it into a ponies mouth wouldn’t exactly work.

In order to make sure that the design we came up with could be used as a basis for future firearm designs, as well as work in game, we came up with a set of rules to follow. The first of which is that all mouth-held weapons need to be designed with quadrupeds in mind. The reasoning is that, while the player may be limited to only the Unicorn race, they will encounter plenty of earth ponies and pegasi in their travels. Both of which are fairly limited in how they can use weapons.

The next rule was that all reload animations for mouth held weapons do not require more than one hoof in order to reload. This was something that we decided upon fairly quickly for the sake of gameplay, which will be explained a bit further in the next rule.

All mouth-held weapons need to be designed so that the user can fire, aim, reload, holster, and unholster their weapon, even when moving. This is probably one of the most important rules for our weapon design, primarily due to the fact that Fallout’s combat, and by extension our combat, is very fast paced. One second you’re walking down a destroyed highway, when all of a sudden a bunch of earth pony raiders attack you out of nowhere. If we had those ponies stop, sit down, and very carefully reload their weapon with both hooves, unable to move during the process, that would make for some incredibly boring combat. 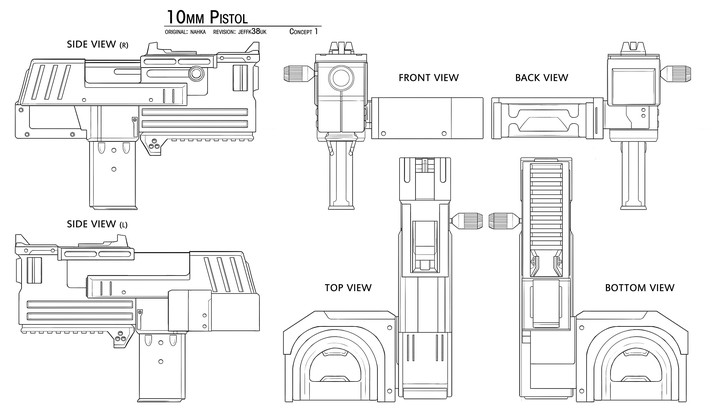 We decided to make the base design for mouth held firearms based upon the N99 10mm pistol, a weapon that has become fairly iconic to the fallout series. However, the design wouldn’t have worked by just replacing the handle with a mouth grip. The gun needed to go through some heavier changes all the way to how it internal components so it would be comfortable and effective to use by ponies. For example, firing a pistol with the slide right in front of your eye would mean one doozy of an ouchie, it is for the same reason that we decided to make it hammerless. We had to look at small arms that used receivers instead of slides (mainly sub-machine guns), which means that the firing mechanisms and the “slide” are all inside the gun frame, safely hidden from open eyes or face parts that could get stuck between moving pieces. This change also means that the gun cannot be directly armed by pulling the slide back, so the gun needed a charging handle that was big enough for a pony to handle.

Another question was the grip placement or the gun position compared to the pony’s head. There are plenty of concepts of guns usable by ponies where the gun was placed right in front of the muzzle or in front of the eye, depending on the artist. Both ways have their good and bad sides; if the grip is placed behind the weapon it sticks out in front of the face, making the already long pony even longer. This causes character using mouth-held weapons to stick out even more when viewed from the side. This is why we decided to place the weapon on the side of the grip, it allows the weapon to remain as close to the pony as possible.

Eventually the final design was modeled, and the end result is what you see here. Determining this mouth held and side-fired design was important, not only for the sake of realism. But, as the battlesaddle did for larger weapons, this 10mm pistol single-handedly unified all of our ideas about small guns. This single look has effectively determined the design of every mouth wielded firearm to come. 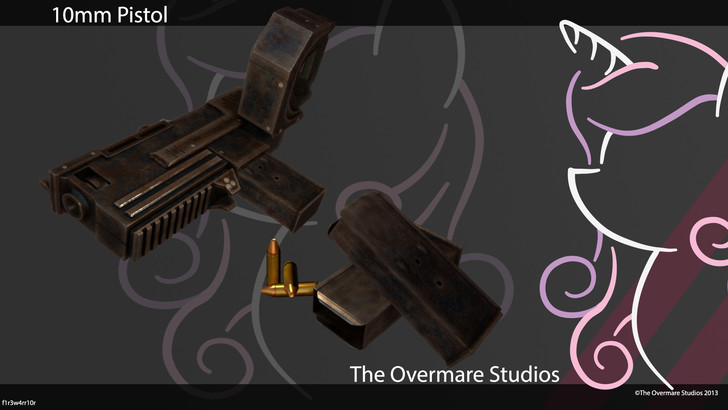