Magic is one of the core tenets of Fallout: Equestria, with most, if not all, of the species using it in one way or another to survive. In our game, you will be able to learn a multitude of unique spells, each with their own unique upgrades and play styles. While there are limitations and restraints in the magic system, it will allow you to be to become a powerful unicorn, if you so choose. 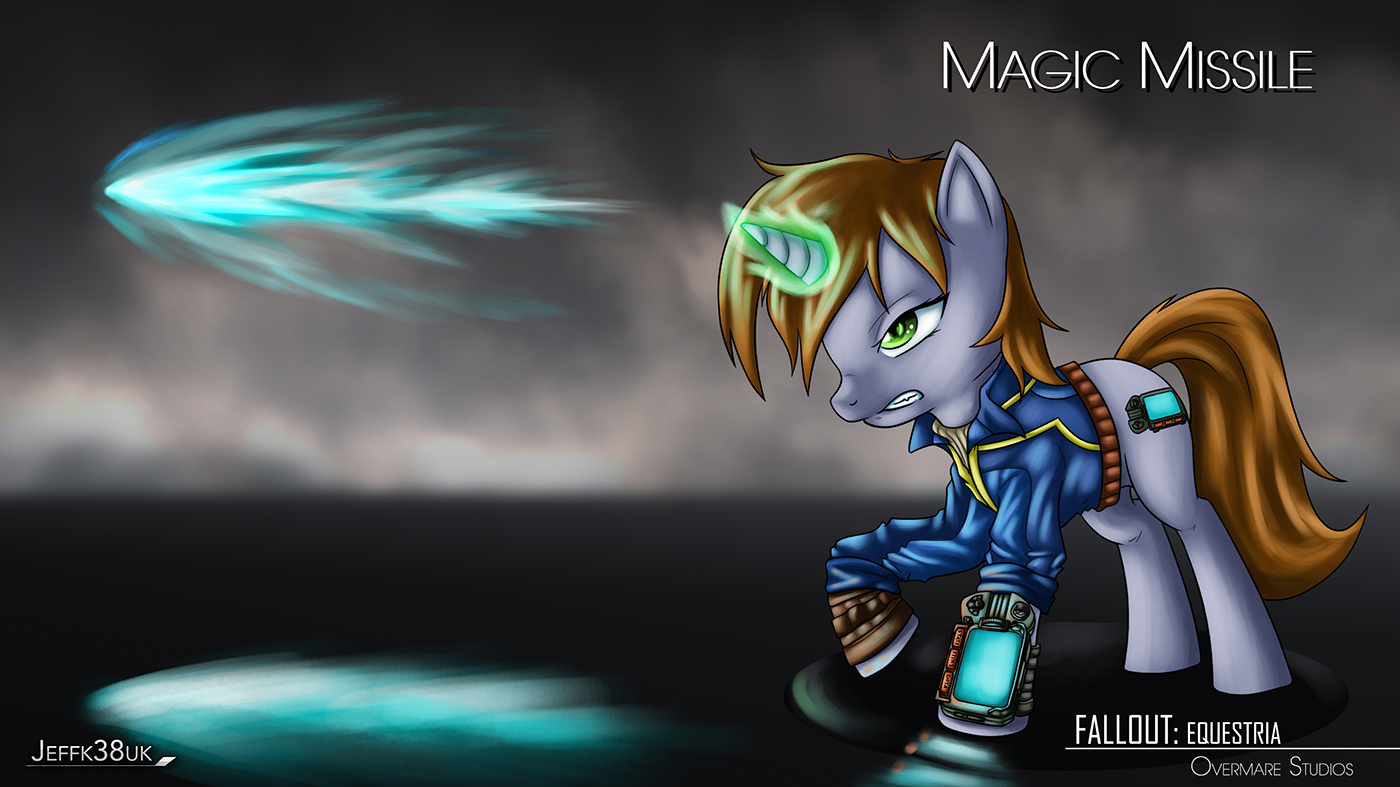 With the magic system, there are two new (with respect to the fallout universe) stats that will deal with magic: Max Strain and Versatility. Versatility is what governs how many spells can be learned and is equal to the Intelligence stat. Max Strain is what determines how much magic you will be able to use before incurring a magical burnout.

In many western RPGs, magic is handled in a way that leaves it very overpowered compared to the other play styles, favouring one play style over another, and limiting the spells is an attempt to remedy this. By doing that, you are required to put more thought into the type of magic you want to learn as well as tailor your spells to fit your play style. Due to the limited spell count, the potency and strength of magic will also be scaled with the player’s progression.

Strain is what determines how much magic you can cast in one go, similar to mana in other types of games (Examples include, but are not limited to: Bioshock, Skyrim, World of Warcraft). However, Strain works in reverse than mana. Strain starts off at zero and is increased by magic use, it will decrease over time when no spell is actively being used. If the amount of strain is filled beyond the strain gauge, otherwise called the burnout limit, you will enter a magical burnout. In burnout, you will not be able to cast any spells until your current strain decreases below the burnout limit. While exploring the world or completing certain quests, you will come across spell scrolls which will permanently stay in your inventory. You can upgrade and learn new spells from these scrolls when used. If you are learning a new spell and all of their available spell slots are filled, a warning will pop up letting them know that they have no more available slots and need to forget a spell to learn the new one.

There are currently eleven separate spells planned for the game. Each of these spells will also have a large variation of upgrades. These are broken up into two types, passive and active. Passive upgrades are simple stat improvements that can range from increasing the length a spell and be cast or the effectiveness of the spell. Active upgrades are improvements upon the base spell that act as a completely new spell.

One example of this is the Light spell. The base version of this spell will cause a small orb of light to appear at your horn as long as you hold the cast button. However, the Light Drain upgrade allows you to use the light spell in a completely different manner. The light drain upgrade will allow you to shoot out a ball of light that is able to attach to a light source and extinguish it for the brevity while the spell is active, making it far more useful for a stealth playthrough. This kind of upgrade is a prime example of how upgrades can change a spell from how it would normally behave to something that has an entirely different purpose and intent.

Another spell that you can learn is Magic Missile, which is a standard style magic attack (Examples included, but are not limited to: World of Warcraft, Dungeons and Dragons). Magic Missile is most useful at short to medium distances and for quicker types of attacks. However, the Light Beam upgrade helps out with attacks that focus upon a single larger enemy from a medium to long distance. The upgrade allows you to create a continuous beam of magic. However, it also has “muzzle climb”, decreasing the effective use of this spell from long distances. One final spell we will talk about is the Shield spell. The Shield spell, when used, will create a shield that surrounds you and absorbs non-melee/unarmed damage until your strain gauge is filled or you are done casting the spell. While this is a useful spell as is, there are two upgrades that, when combined, allow the spell to operate in a completely different fashion. The Damage Shield upgrade causes the shield to damage enemies that enter the shield’s parameter. The Static Shield upgrade allows you to charge up the shield spell and put down a fixed shield where you want. When the Damage Shield and the Static Shield upgrades are combined together, you would be able to cast a shield over the enemy location and cause them damage over time, forcing them from where they were. This a good example of how the upgrades of a spell can be combined together to make the spell do something that would normally be impossible for it to do.

Magic is one of the more powerful and diverse systems that will be in Fallout: Equestria. While there may be limitations on how much you may be able to use, magic will be something that everyone will be able to get into with our game. Magic will be a highly versatile skill with upgrades allowing any kind of play style to be supported by a variety of spells.

As a reminder to everyone, our PipBuck Art Contest is still ongoing! Even if you aren't the most artistic person around, we still appreciate all of your ideas and effort, so don't be afraid to give it a shot! Just remember to read the rules before submitting, and you will be fine!