How would a pony defend him/herself in a radioactive wasteland? With guns of course. But how would ponies use guns? Surely they could use pistols and small arms with their mouth, but what about the bigger weapons that are either too heavy or have too much of a kick to handle without issues? The story did give an obvious solution for that; the battlesaddles, but we still needed to figure out solutions for several problems, like how would they work, how would ponies use them and which end says BANG!

In order to start designing the battlesaddle, we needed a general weapon design to use as a base. The weapon in the video is just a placeholder for now, and will either be dramatically changed for in-game or will not be in-game at all. But now we have a good starting point for what the actual, in-game weapons may look. We will explain our weapon design in a future update, but for now the battlesaddle.

The first thing we needed for a reasonable and realistic battlesaddle was the frame, or the underlying structure. Since the battlesaddle would need to be used by both Earth Ponies and Pegasi, the frame needed to be designed to account for wings, allowing them to stick out, flap, and retract.
​ 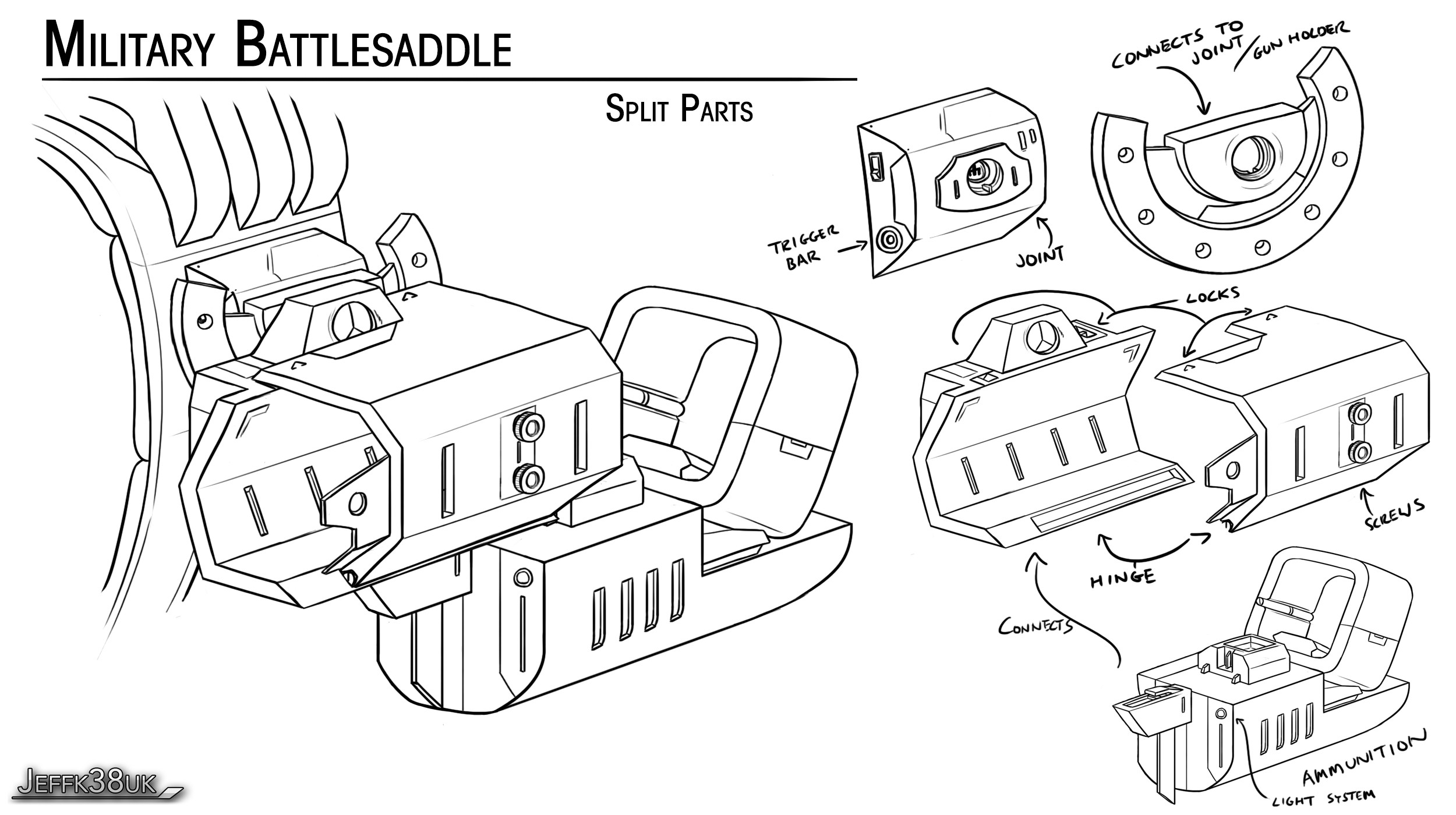 Even with the frame done, we needed additional underlying structure to the saddle. We needed a connector and brace that holds the guns to the frame. Now, we could’ve taken a shortcut. The easiest way to do that would be to simply slap the gun to the side of the saddle and call it a day. But this would not have made sense in the world. What if a character needed to aim up or down? Do they shift their entire bodies? Did that mean only pegasi could use it effectively? Why would it be designed to exclude the earth ponies?

So, slapping the gun directly on the frame was not a reasonable option. Instead, the saddle was designed to look as though it has a motor that can mechanically turn the weapon on a pivot. This would allow for a much more lore and Earth Pony friendly design.

With that done, even more design questions cropped up. We had to ask ourselves “how the heck does someone aim this thing”? One answer was training. Users simply had to work at proper aiming, like the sharpshooters of the old west. But since some ponies could make a saddle into a sniper rifle, a more refined system was needed.

We next approached the idea with a scope in mind. Perhaps all scopes had a simple form Eyes Forward Sparkle that would ‘tell’ the user where to aim, like an over complicated tracking system. But without a proper way to explain this to the player, and with no lore backing this assumption up, we feared it might also seem like a stretch. 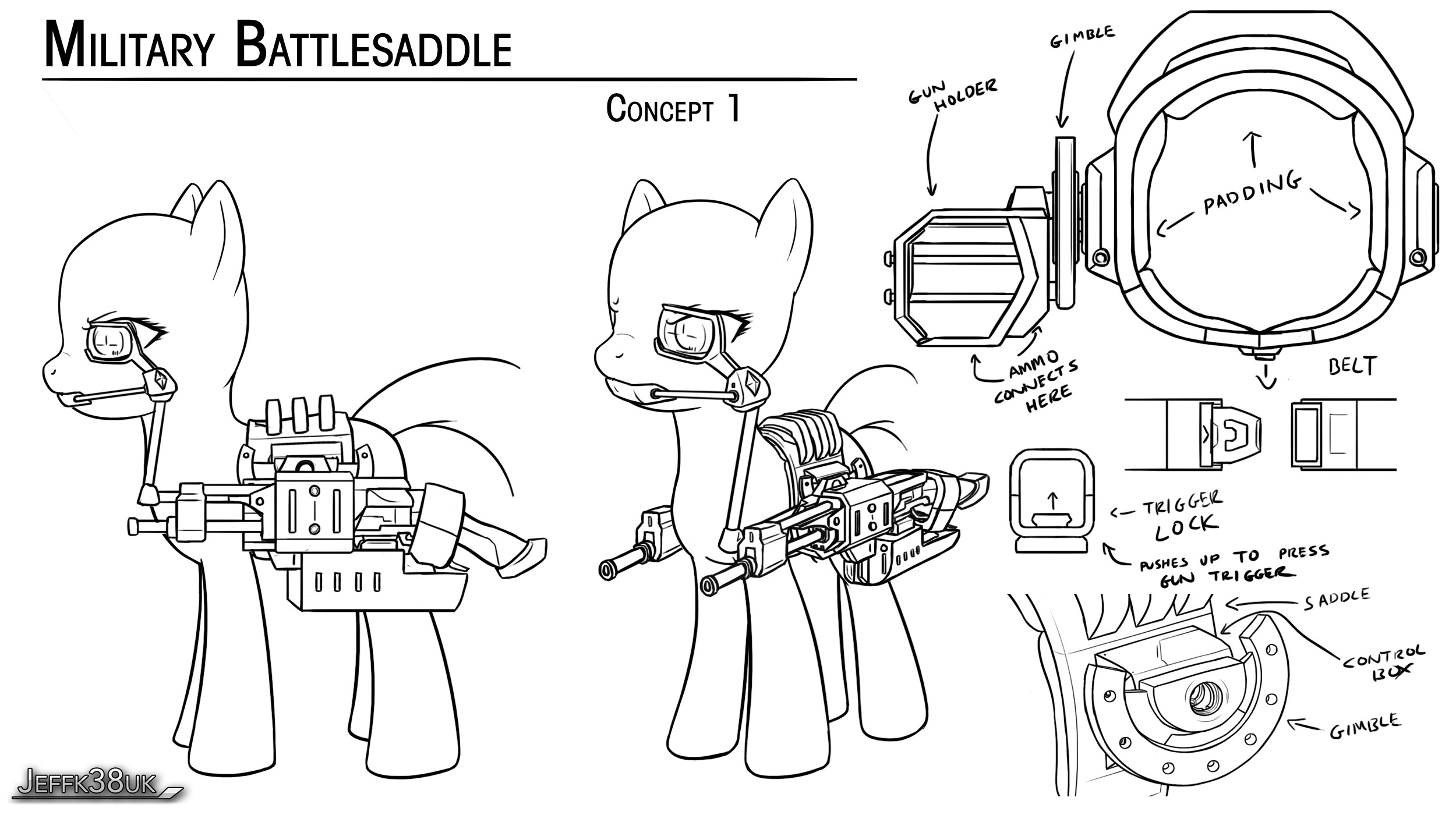 Eventually we came up with the idea of having a sort of ‘sight’ on the mouth bit. This sight would be linked to the weapons, and the motor would aim the guns where the user pointed. This seemed like the best way to make the battlesaddle reasonably aimable, without making it look too ridiculous.

And yet, with all the thought that went into the frame and aiming, the hardest part was yet to come. The ammo source and reloading mechanics were without a doubt, the most annoying to design. We wanted something that looked cool, but also showed how the weapon was reloaded. But as time went on we found that the more interesting the reload method, the more difficult it was to model and animate.

Not wanting to put too much burden on the animators, we decided to go with what we call the ‘infinite mag’. Its a large magazine that not only holds the ammo, but also feeds it to the weapon. This mag is universally designed to be able to feed rounds to any weapon using a battlesaddle whether they be a magazine feed or belt feed. Despite the name and size, the ‘infinite mag’ does not let the user fire forever, and will still be limited by ammo on hand.. 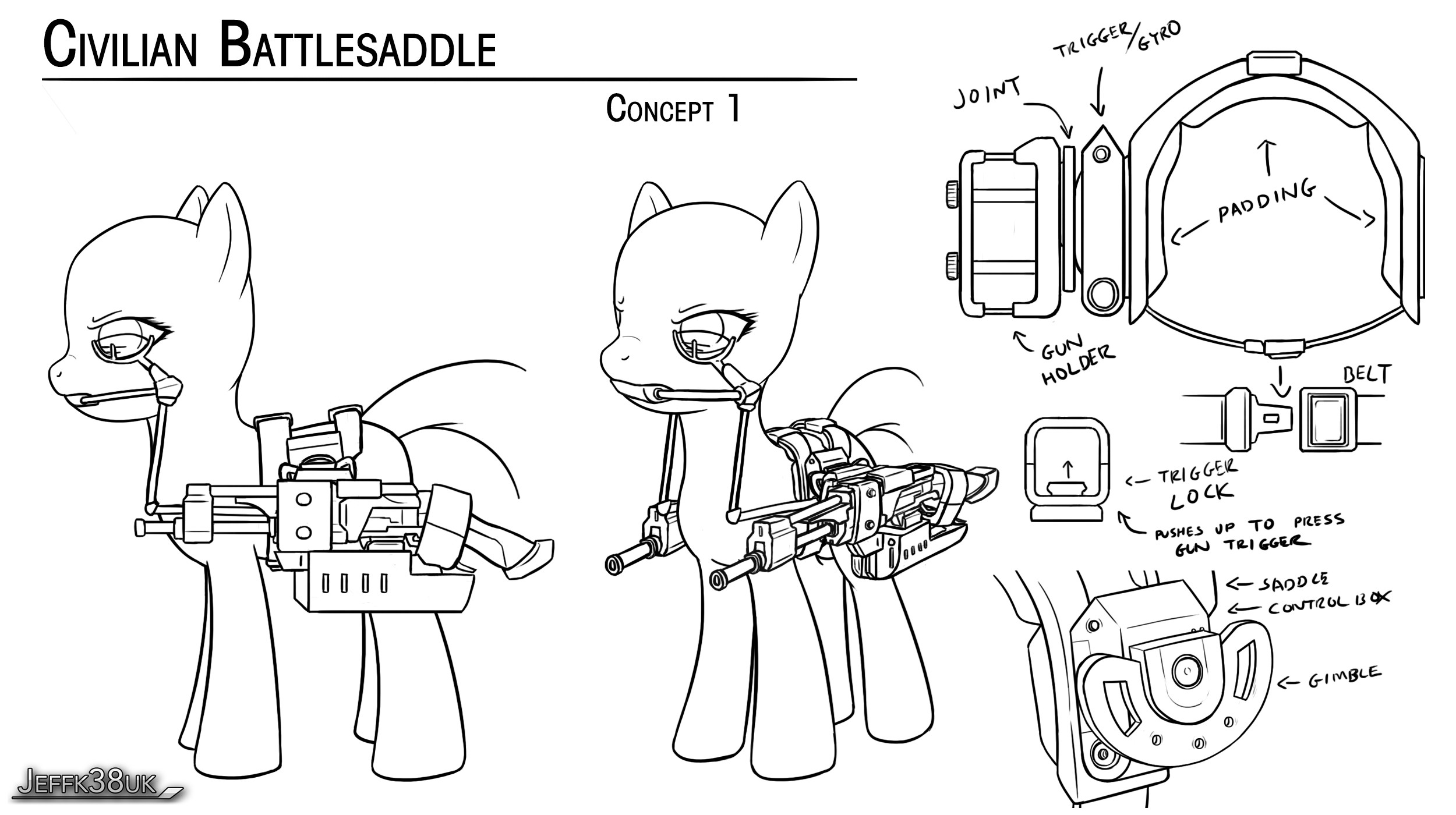 After all individual parts were done, we had our first battlesaddle concept. However, before we were ready to call it finished, it required small iterations in various areas. Around this time another question was brought up; is the battlesaddle used only by the military, or also by the civilians? After all, there would have to be a way for normal citizens to be able to use a larger weapons than a pistol as well, whether it be for hunting, self-defence or something else.

Easy answer would have been to say civilians use the same battlesaddle and call it a day. However, the idea of normal ponies who aren’t directly affiliated with the military having a war-ready battlesaddle sitting in their closet didn’t feel right for us. So in the end, we decided to make two versions; a regular military version, and a lighter civilian version. Basically they would function pretty much the same way, the only differences are that the military saddle is used in heavy-duty action while the cheaper and lighter civilian version is much more common but not as durable. Hence the military version would be seen used by professionals only while the common ponies and raiders have to settle with the civilian saddle. 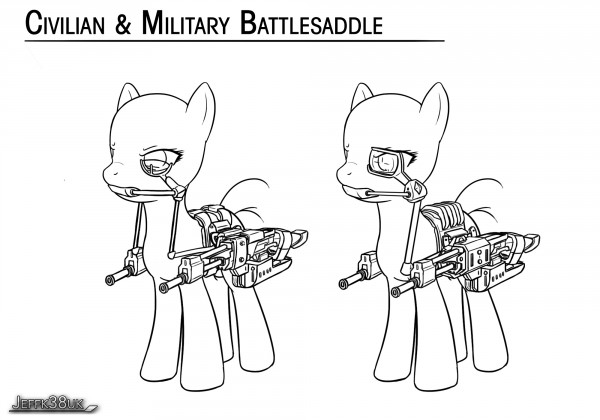