One of the most important parts to design properly while developing a large scale game like this, whether the player realizes it or not, is the weapons in the game. How they look, how they are used and how they function, it all plays part in the immersion and what weapons the player ends up using while playing the game (now who would like using an ugly gun while traveling the wasteland? We know we don’t…). While the visuals are important, the weapons still have to be able to work as a part of the game and be reasonable to make without tremendous amounts of extra work for each weapon.

Everyone has their own vision on how ponies should use weapons or if they should use weapons at all (what’s the fun with that?). While we are fully aware that we won’t be able to satisfy everyone, we are putting every effort into designing weapons that work and don’t look awkward, while still being as versatile as possible, even if this versatility could not be shown directly in the gameplay. The aim of this post is to clarify our reasoning behind the way our weapons were designed, and hopefully answer at least some of the questions and concerns you guys have told us about regarding them.

Since the release of our Alley of the Artists IV post, one of the largest concerns regarding our larger weapons has been how they could not be operated by ponies, and to an extent, that is true. A real pony in our world simply does not have the ability to bend their legs in a way that would allow them to hold, much less fire a weapon. But the ponies in the Fallout: Equestria universe are not real ponies. As we have seen in the multiple times in the show, the ponies in Equestria are able to perform feats of dexterity with their legs that a real pony could only dream of. Capable of not only gripping things with their fetlocks, but also able to bend and turn their front legs in a way much closer to that of a human arm. Best way to describe how we design something that would be operable with hooves, is to think them like they would be held by a human that would only ever hold things with a closed fist. 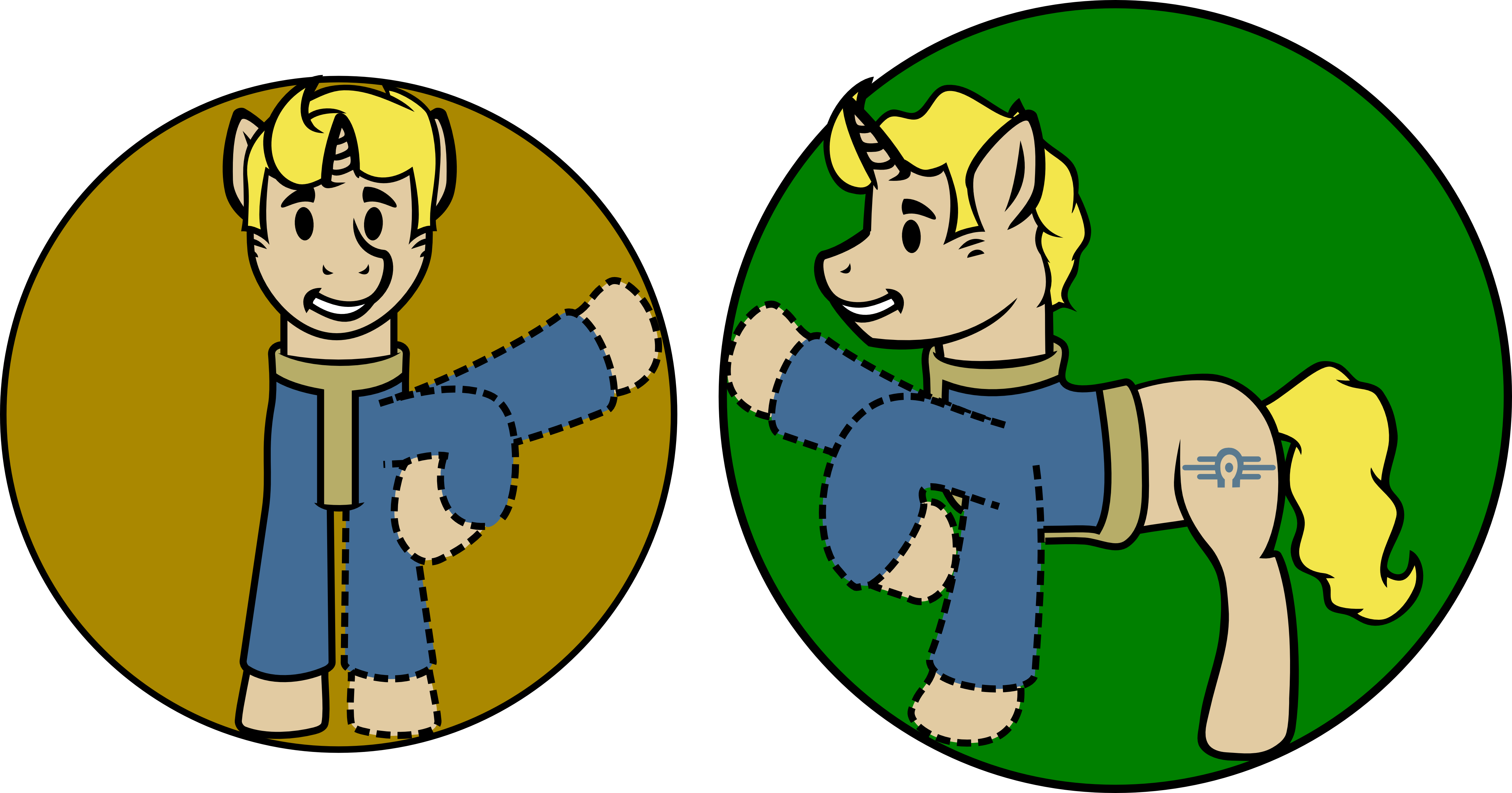 When we first started designing our “two handed” (hooved?) weapons, or weapons used in a battle saddle, we realized that we could not simply design a weapon solely for the battle saddle use, as the player would always be levitating the weapon. A weapon without an actual grip or firing mechanism like a trigger would probably look confusing for the player, and in some cases not very pleasing for the player’s eyes. We wanted it to look obvious on how a weapon was fired as well as make it seem like the battle saddle was not ‘required’ to fire the weapon. A traditional rifle/pistol grip might work with hooves to some extend, but would most likely look out of place, not to mention be very uncomfortable to use when firing the weapon. After looking for ideas we stumbled onto an idea that might explain how the weapons could be held, as well as how to make the trigger. A crossbow. Medieval crossbows not only featured a long slender trigger, but also a nice rounded grip, both of which a pony could, in theory, hold without issues.

The next issue was how the weapons directed the recoil when firing. Unlike humans, ponies are quadrupeds, which means that they do not really have shoulders to brace a weapon against. This means that a traditional stock would not work without the pony having to take some weird pose in order to just fire the weapon, not to mention that an extended stock would make the weapon longer and possibly cause some issues with battle saddles. In addition longer weapons would be difficult to handle in game due to tighter spaces where the player might and eventually will go. After all, seeing weapons clip through the walls every time you go indoors would not be a very pretty sight.

We played around with some different ideas and even searched the community for inspiration until we settled on one idea. Instead of a regular stock to brace a weapon with, a pony would use a type of forestock that they brace a hoof against to absorb the recoil. This allowed us to ditch the normal stock completely. And just to make sure that the recoil is not too much for the pony to handle, we like to think that the weapons also have internal arcane tech and gems to reduce the recoil and not make the weapon fly past the player’s head every time a weapon is fired in telekinesis. However because the recoil has a very important role in balancing the weapons gameplay wise, it is not removed completely. 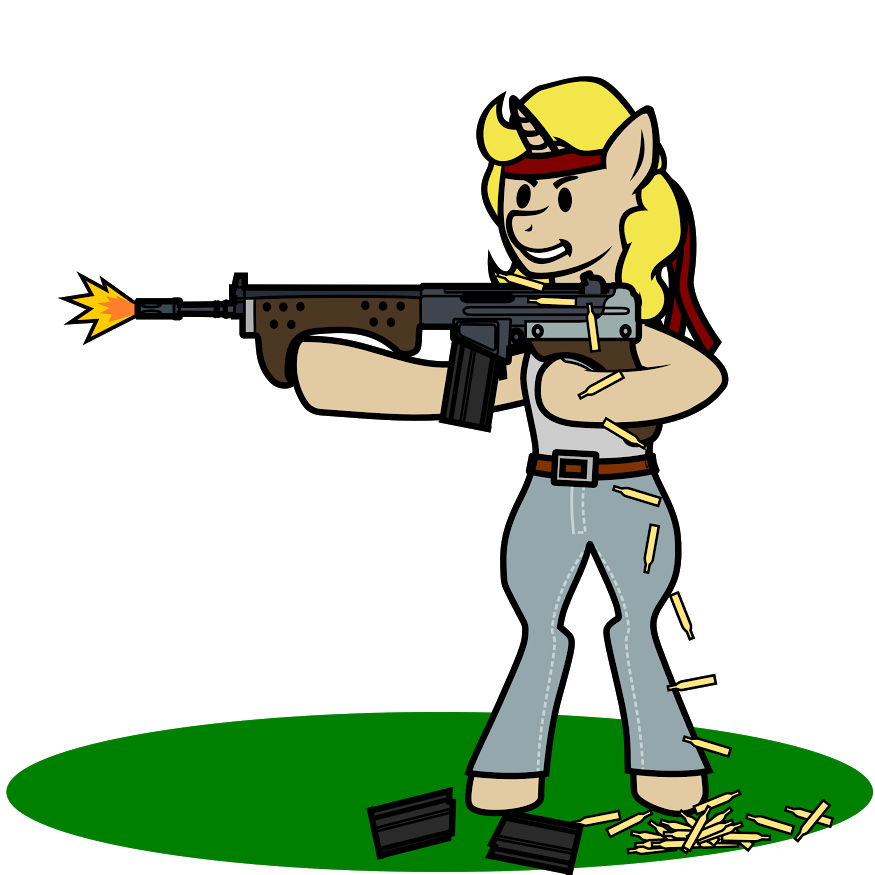 Among our community the recoil has also been a huge concern when it comes to the mouth-held weapons, especially the short barreled shotgun, which would supposedly snap the users’ necks or at the very least break teeth when fired. This was also our concern even back when we designed the 10mm pistol, and some of us spent weeks trying to figure out a way to reduce the recoil and think of ways or reasons how or why it would be manageable. We have come to believe that due to ponies’ general anatomy and how much they use their mouths for carrying and moving stuff around in their everyday life, ponies have considerably stronger neck muscles and teeth than humans. Also as we already mentioned with the larger weapons, many of the mouth-held weapons, such as .44 Magnum, also have internal tech to help deal with the recoil by both reducing it, and directing it from a safer relative direction (straight pushing force against the user instead of torque around their neck).

The lore also has an effect on how some weapons work and look. While it’s not limited to them, there are three main races that have manufactured the weapons the player will encounter throughout the wasteland; Equestrians, zebras and griffins. Each of these races have their own distinctive styles when it comes to weapons. Ponies have a bulky but still sophisticated and refined look to their weapons, while zebras have a cheap, mass produced look on their weapons. Zebra weapons might not be pretty, but they will work even if you stuff a snack cake inside them. In a very broad sense, comparing the guns of these two races can be thought like comparing a M16 to an AK47 (however, there will not be any M16 or AK clones in our game). 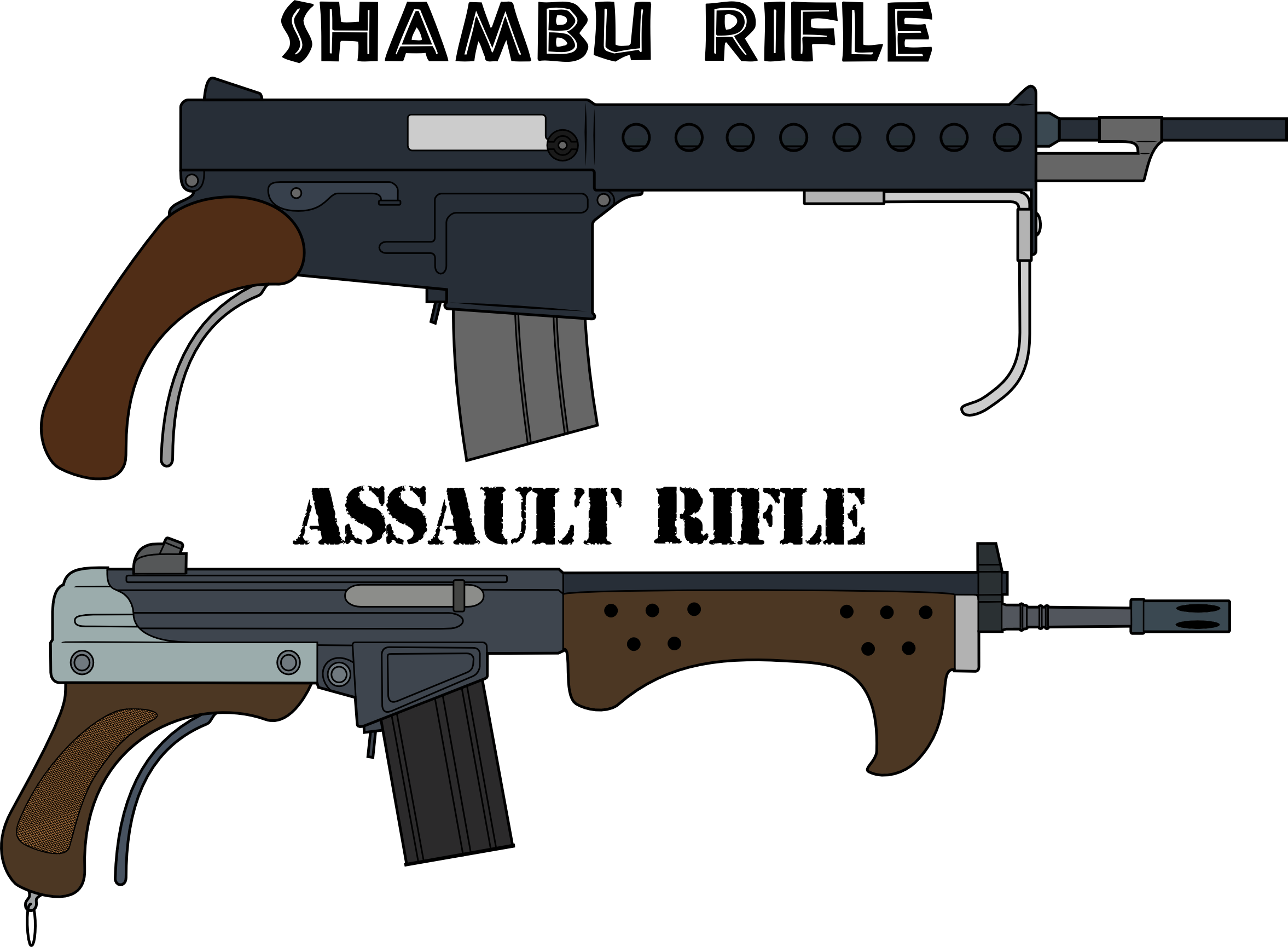 Griffins are an odd race compared to the other two considering that they have talons to operate their weapons. This is fairly obvious when looking at the hunting shotgun, which is the traditional shell fed pump-action shotgun. The weapon has been designed in a way that even a pony will be able to hold and fire it, even pump it to chamber the next round with some effort, but for other than unicorns reloading would be extremely tricky at best due to not having thumbs. We also think that the griffins are a heavily militarized race, a warrior race, who value their weapons and armor, so their weapons are designed to be elegant but still powerful. Some of the weapons even have engravings and other design choices to make them as pleasing to the eye as possible.

However our general rule of thumb with all weapons is that every weapon we design should be usable by all races in the game, no matter which race created the weapon. This means that all races with similar size and anatomy will use the weapons the same way, so even griffins will use mouth held weapons in their beaks and rifles in battle saddles. The reason behind this is to save resources to other features instead of having to make different weapon animations for every race, which means hundreds of animations per race. Of course we can think that griffins use battle saddles to free their talons for some quick and brutal melee attacks if surprised.

To finish this post off, something that people have been asking us nearly from day one is whether you are able to dual-wield weapons in our game. We can now confirm that you indeed can! However unfortunately to some people, it will be limited to a maximum of two regular weapons, and no heavy weapons can be dual-wielded. Even if it could be argued it does not make much sense from the lore perspective, seeing Littlepip was wielding three or more weapons at once and was awesome at it, this is purely because of balancing reasons and the controls designed for dual wielding. Besides, there is not much you can do with three or more guns but cannot do with two.

Allowing dual-wielding presents us with an another rather unique problem with the weapon designs. While dual wielding is easily enough explained for unicorns due to their magic, it’s a bit more complicated for earth ponies, pegasi, zebras or griffons. If you were to just slap two weapons on the sides of a battle saddle, one of them would end up ejecting empty shells straight against the users side, which would lead to rather nasty burns. To solve this, we are designing all battle saddle weapons to be ambidextrous, which in most cases means having the receiver and ejector port be a part of a piece than can be flipped around or replaced with another piece. Mouth-held weapons however, both firearms and melee weapons, cannot be dual wielded, with the exception of unicorns with their magic.