A Little Bit About PipBucks

Hello and Salutations the third!

This fortnight we’re happy to explain a little bit about our development process, starring the 2D and 3D team. For those interested in the process, happy reading! And for those who think reading is for squares, there are some pretty pictures as well. Now we’re happy to turn it over to J38UK and Nahka of our 2D and 3D teams respectively. Take it away gents.

Concepts are a crucial step in bringing the tone and style of development team’s vision to life. Design can have the most wonderful visions on the face of the planet, but without a capable artist, the ideas would never see the light of day. One crucial element of Fallout: Equestria is the PipBuck, but it’s a bit more complicated than strapping a PipBoy from Fallout on a pony. Though FoE is based on the Fallout 3 universe, it is its own monster with style elements from the FiM universe. One has to consider that a hoof simply does not have the same dexterity of a hand or fingers. As such, buttons have to be chunkier, levers have to be longer, wider, or adjustable with a hoof nudge or mouth grab. This applies to all objects that need to be manipulated, and while LittlePip can manipulate it with her magic, one has to consider earth and pegasus ponies as well. 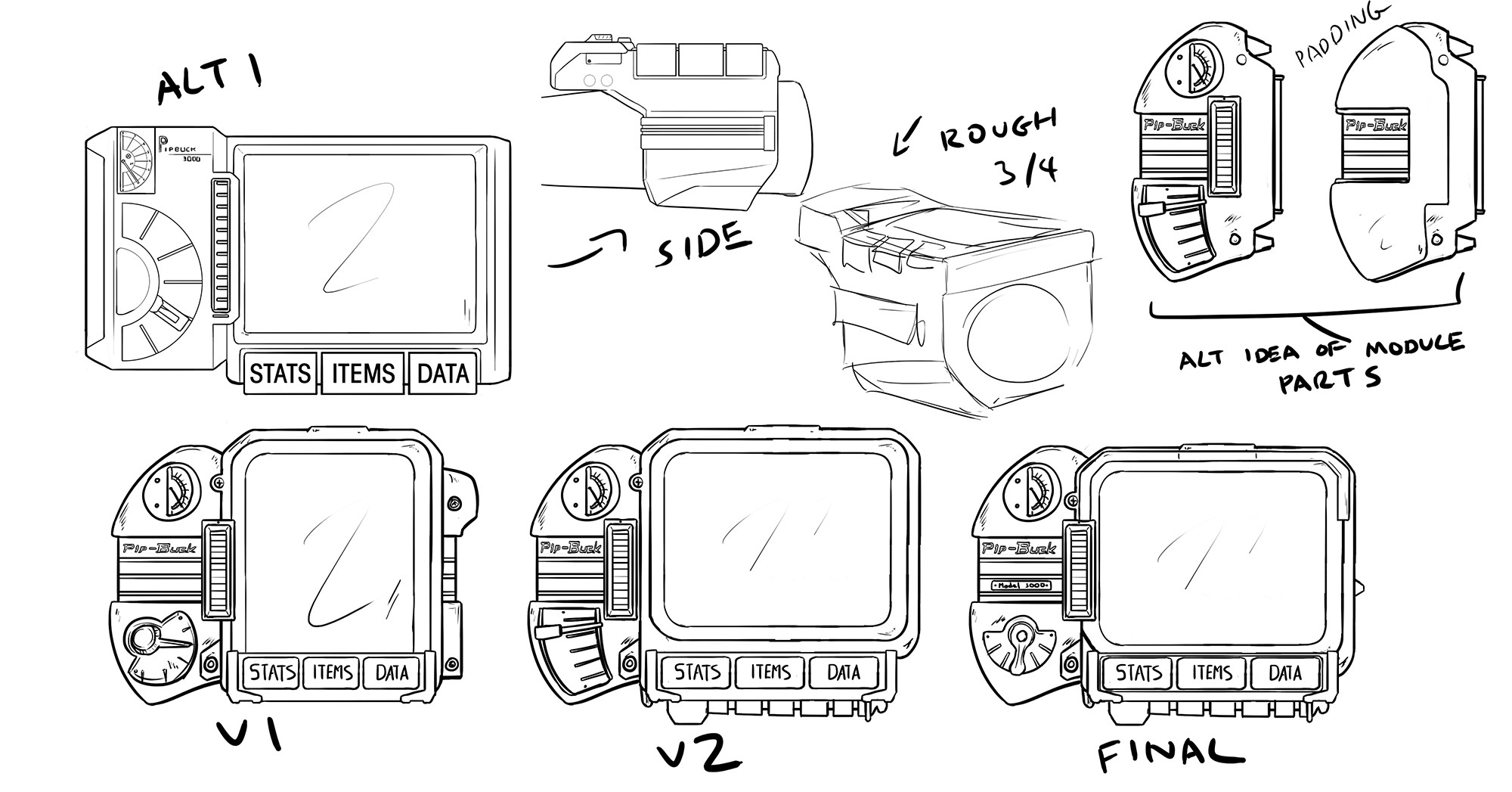 For the actual design, there were two ideas: draw inspiration from the original PipBoy-3000, or create our own take of the PipBuck. As you can see, we chose the former, while adding our own changes that make the device more functional with hooves. For example, bigger buttons and a dial wheel,.

One thing fans will (and have) notice is that these are designed with a right hooved pony in mind. As some will know, unlike in the story, in the game LittlePip wears hers on her left hoof. This was an early design choice for multiple reasons. To allow the choice of left/right hooves we would have to create multiple armour configurations to fit the PipBuck, that’s not accounting for two user interfaces, or UI for short, that would need to be designed. In the end, FoE allows players to customize their own character, and sadly allowing the player to choose their dominant hand (or hoof) would multiply the resources needed exponentially.

Below you can see the final concept page for the PipBuck that was sent to our 3D team who took the next steps to make the PipBuck real. 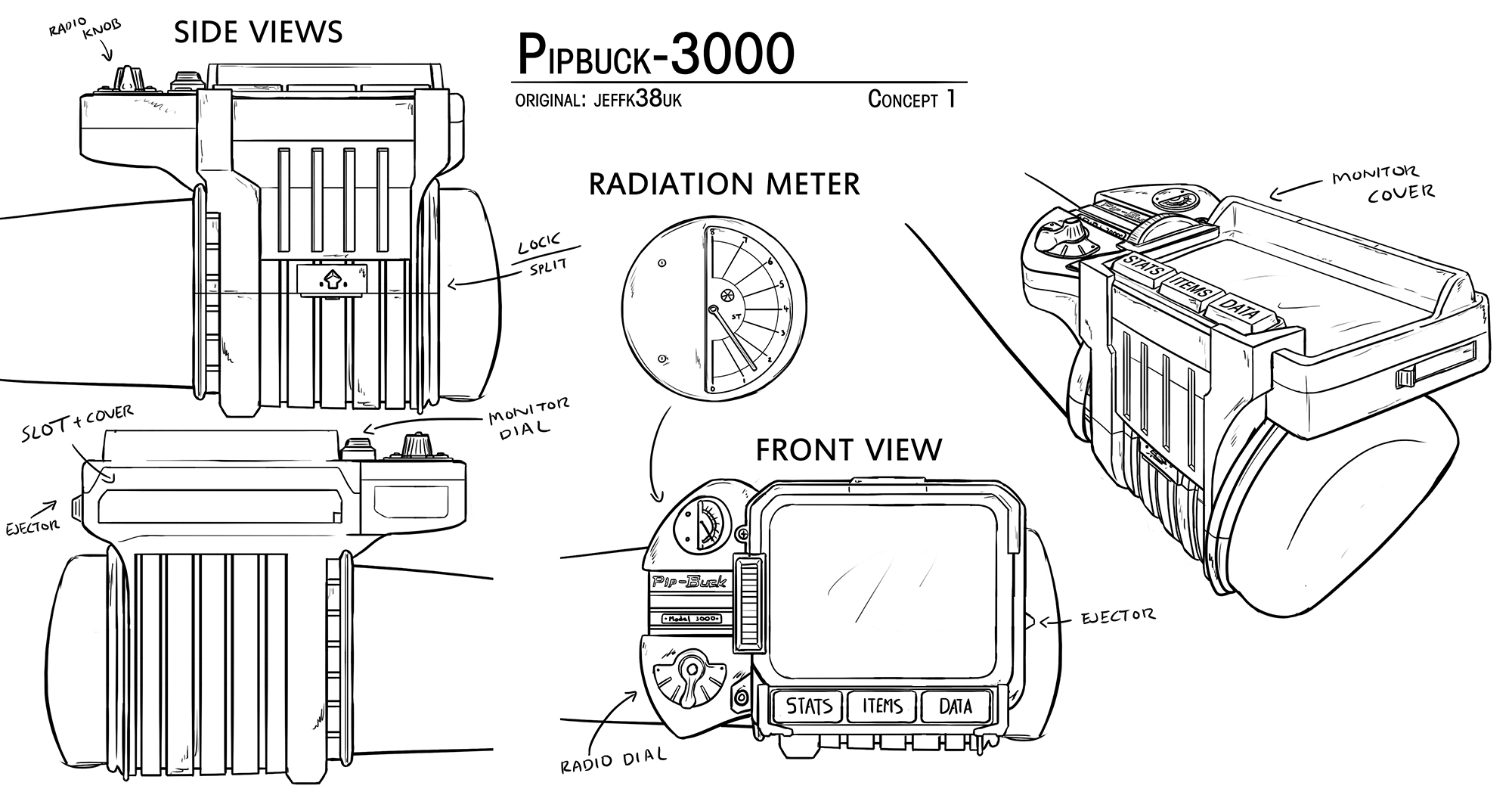 People may think that turning a concept into a model is easy as long as the concept is solid. In reality, no matter how well the model is designed, or how much detail the concept angles have, there will be parts that need to be redesigned or at least modified in order for the model to look good in a 3D environment. This is why a concept should not be considered a blueprint, but rather a guideline of how the model should look and work.

One of the biggest changes to the PipBuck design was the shape of the wrist band. Since the leg in the concept art was shaped like a cylinder, this conflicted with the cone shaped legs of the pony model. This was done because hooves are much wider than the middle section of the leg. As a result, the cylindrical wristband would either have looked to be falling off the leg because of the extra space between it and the hoof, or so tight it would been a surgical implant. Needless to say, tweaks had to be made. But the end result ended up looking both functional and stylish. Rarity would be very proud. 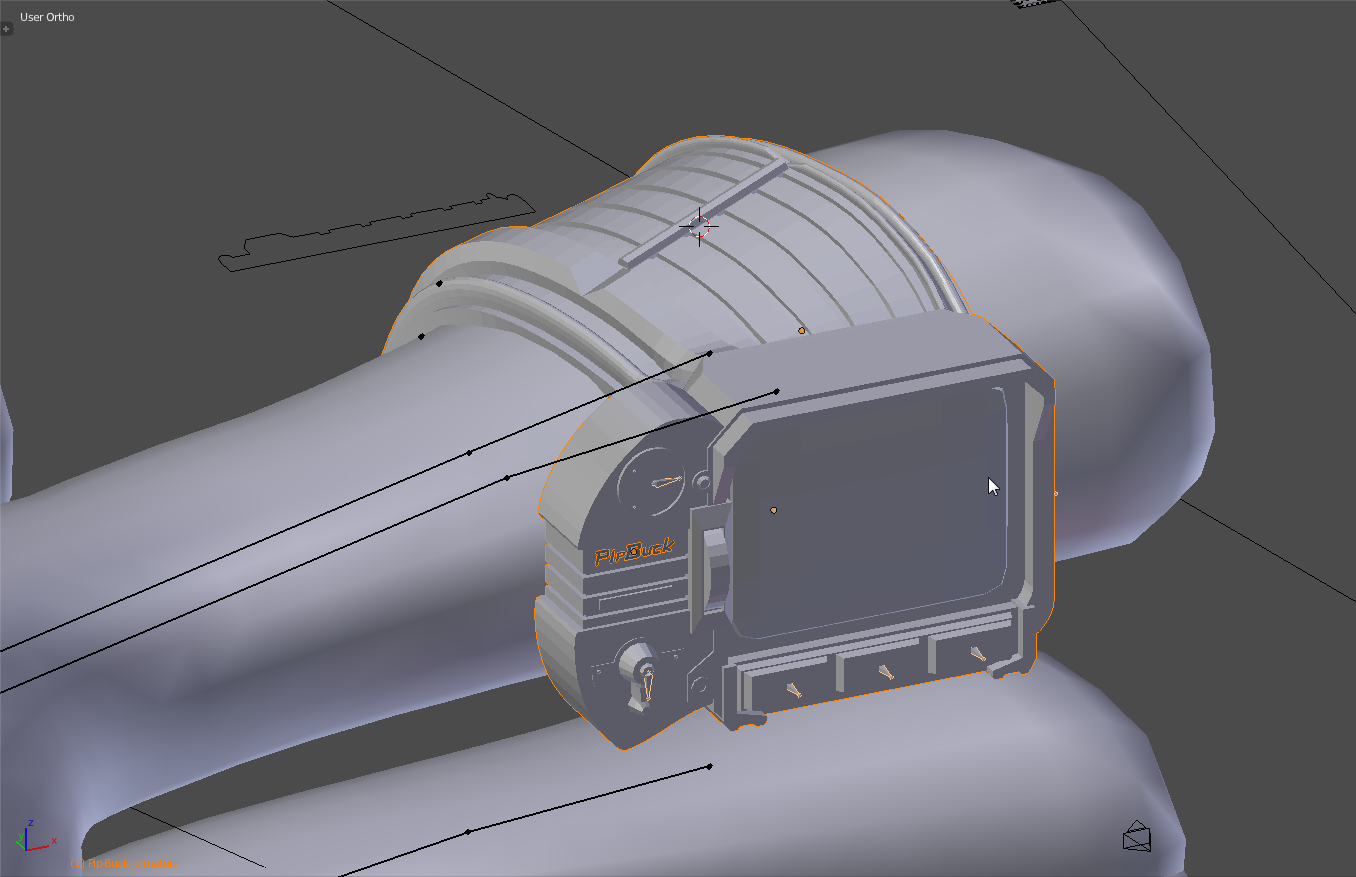 After the base model was made, it was passed down the pipeline for UV unwrapping, texturing, and sculpting. Since the PipBuck is a 200 years old item worn above the hoof, it would show quite a bit of wear such as scratches and chipped off paint. Regardless of the beatings it’s taken, it would still be fully functional. The end result might not quite look like it’s 200 years old, but PipBucks are ridiculously durable. The texture is similar in tone to Fallout 3’s style, meaning a little simplified but still realistic. However, considering the PipBoy was made in ‘08 and here we are 5 years later, the aesthetic quality of the model has jumped considerably.

After all texture maps were done, the model was sent for final fixes and rigging. Each button in the device is rigged to their own bones and the wristband can be opened so the device can be removed from the leg without swapping the model. You can see the finished PipBuck below. 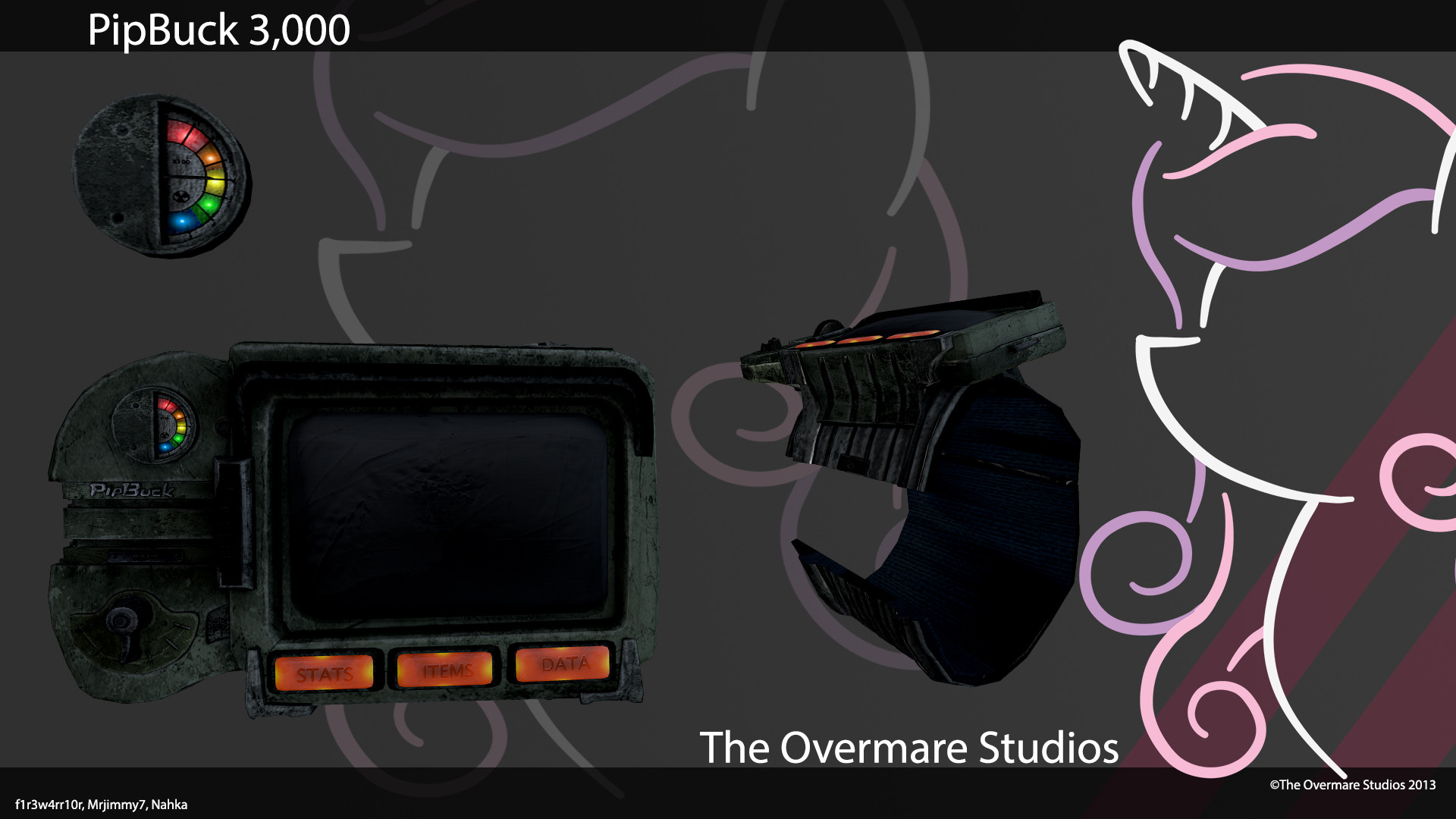 Model: MrJimmy7, Nahka, f1r3w4rr10r Concept: J38UK
If you’ve read the story, you know that there are a quite a variety of PipBucks, one of the important ones being Velvet’s PipBuck. Due to its impact in the story, we felt it requires a separate, fancier looking in-game model. Velvet’s PipBuck is described to be “a more elegant model with her initials and cutiemark embellishing it tastefully,” but we figured that having only one model would mean more spare parts and having a custom engraved PipBuck for every celebrity in a stable for generations to come wouldn’t make much sense. The decorations are removable instead of being embedded into the device, so a pony wouldn’t have to wear a PipBuck with someone else’s initials on it, and the color scheme was decidedly black and gold instead of the usual green. Basically the in-game model is the same as the regular PipBuck, but with additional decorations added on it. 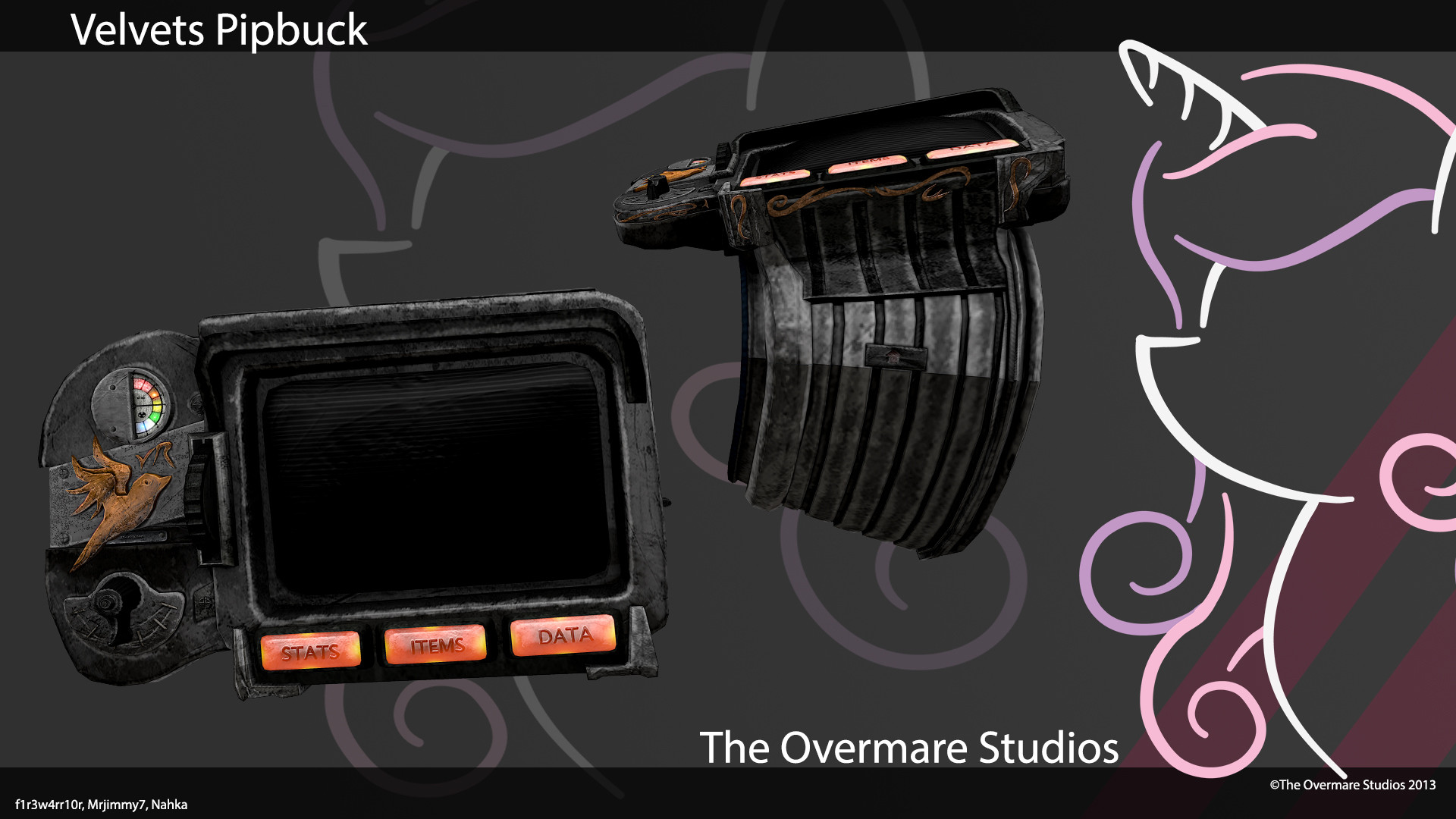 Lastly, we have been working on the website. Small tweaks and changes that you may have noticed, but for the most part they are minor. If you have submitted an application within the last two weeks, we should be getting to them soon. You will receive an email when we do. We made the whole system a bit more robust. Applications for Music are also now closed. Thank you to everyone who applied!