So with BronyCon over and everyone on the team finally back in their countries of origin, it is time for the wrap-up of the event of the past few weeks. And of course, release our latest demo!

Let us start by saying that BronyCon was a complete success this year! Not only did most of our stock sell out at our booth, we also came back with a little bit of spending cash for next year. On top of that both our panel, which had a full room, and our Wasteland Wailers performance where also complete successes. None of that would have been possible without the tireless hours of work that each and every member on our team put in each day, but not only that but the sheer amount of feedback and support given to us by all our fans.

Now with all the sappy stuff out of the way, let's get into the details of what happened at BronyCon 2016.

Thursday was when most of the team arrived at Bronycon and for the most part was a fairly uneventful day of trying to get set up and figuring out just how much stuff we forgot to bring with us. Some of you may have noticed our haphazardly hung up drapes and table cloths... Well, originally we planned on having our booth looking like the image above, we spent days sewing, measuring, resewing, in an attempt to make our booth as flashy as possible, only to realise at the con that we did not plan a way to hang them up! Thank Celestia we had a bunch of safety pins. You might also notice the cool looking banners that we also planned to have at the con, for which we were planning on using our fancy new printer. Well after 3 completely messed up attempts, unfortunately we ended up having to scrap the idea (next year with better luck!) 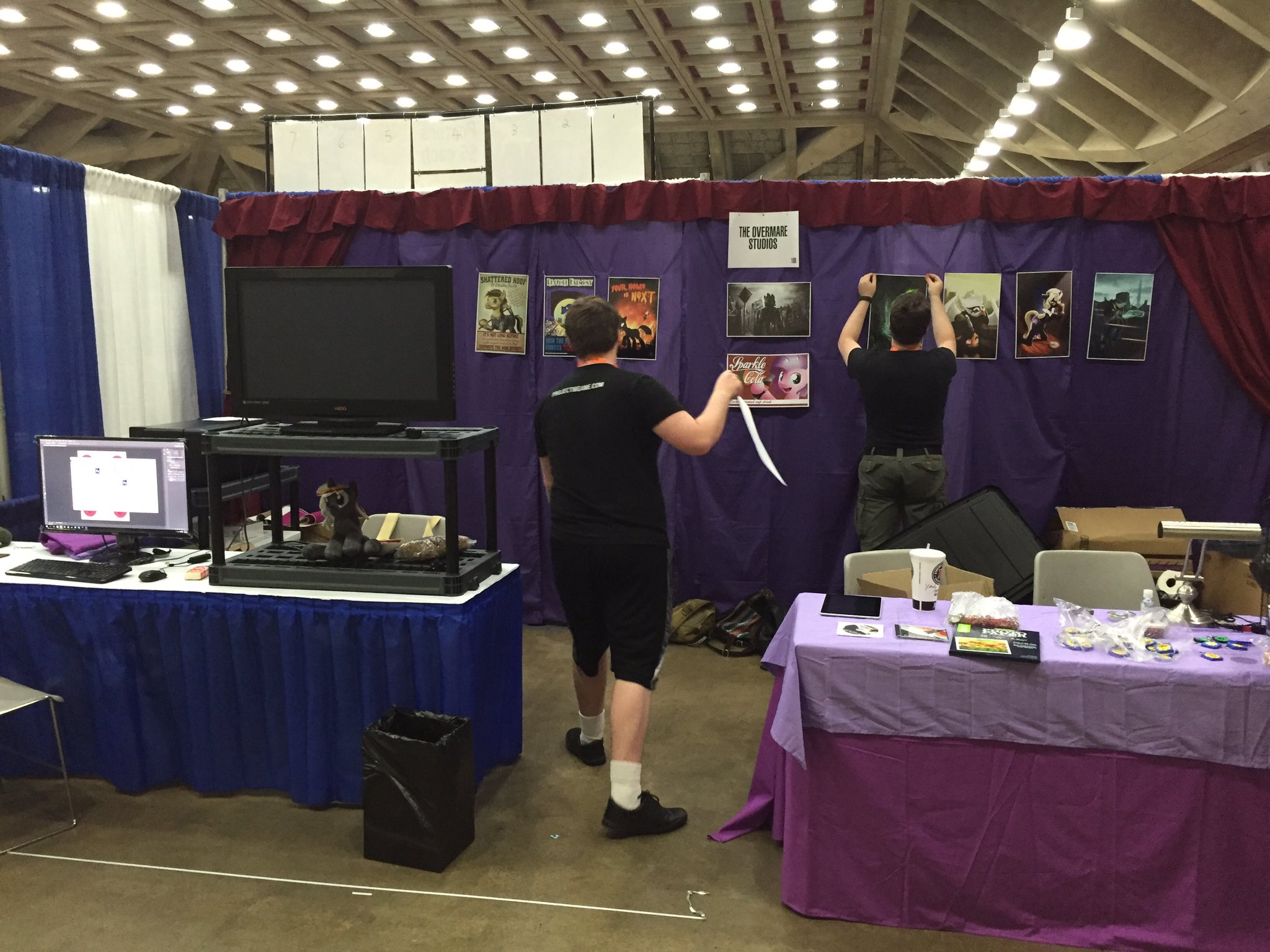 On Friday we awoke to the realization that the method we had planned on sealing our Sparkle Cola lamps was not going to work, and was left hoping that the “1 day delivery” on the bottle press we found on Amazon was actually going to be one day. With the bottle press ordered we head to the convention hall to prepare for the first proper day of the convention, and to finish setting up. It was also during this day that we learned that ECONOMY button press, actually means TERRIBLE button press. At least the receipt printer worked!

Day 1 of the con ended with the team checking out the amazing performance by the Wasteland Wailers at Bronypalooza. I’ll tell you, hearing them live for the first time was quite an experience (Brittany FTW)! 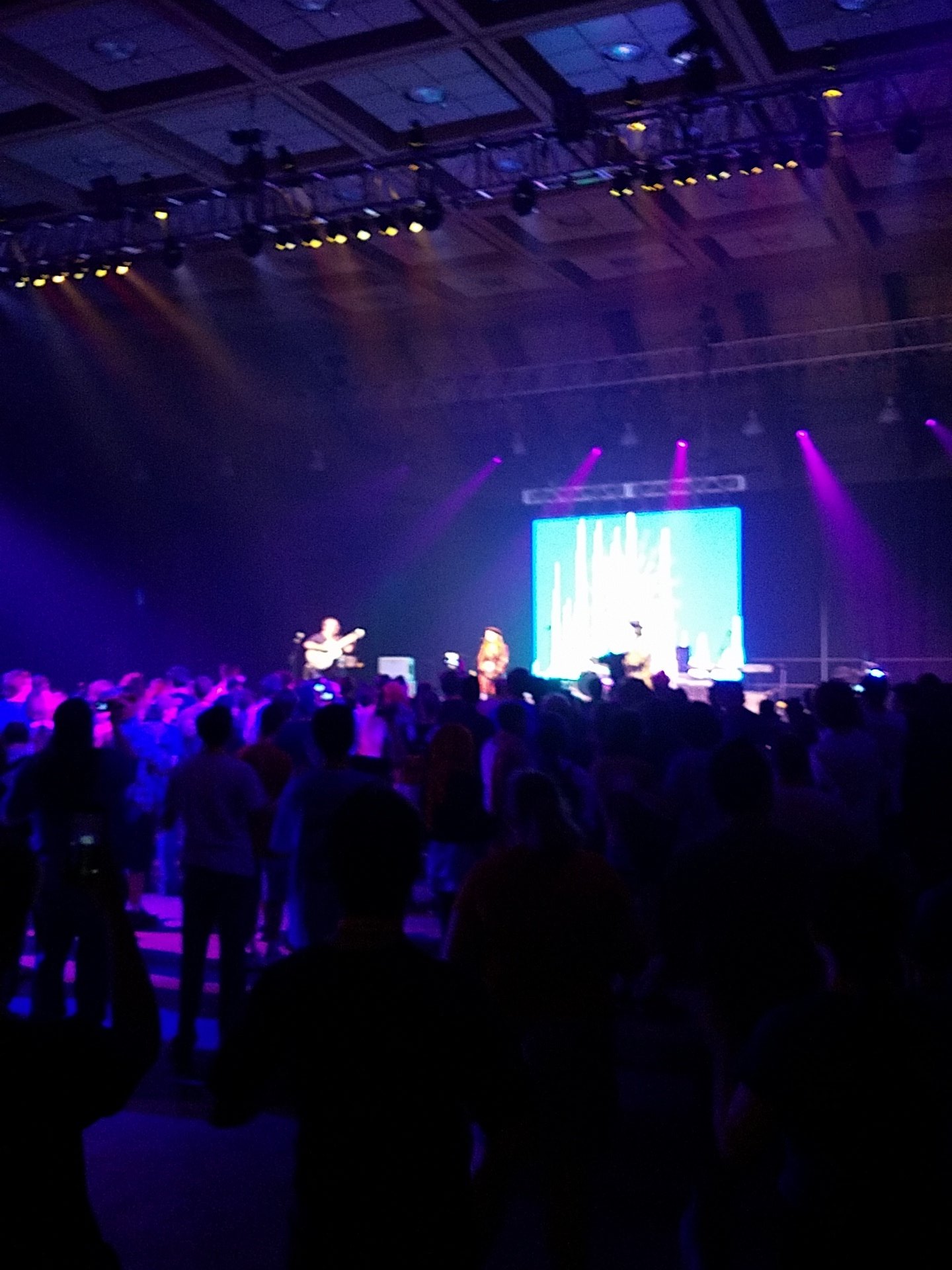 Day 2 could best be described as panic as we were still waiting for the bottle press, and some stuff at the booth was STILL only partially set up. It was about mid-day when we had to temporarily close down the booth and prepare for our first BronyCon panel. To say that we all were a little nervous would be an understatement, we could hardly believe our eyes when we saw the line for the panel not only went all the way to the end of the corridor, but then circled BACK as well! Despite that however everyone seemed to enjoy our nervous ramblings, so it couldn’t have been a total bust… right?

The third and final day we finally got our bearings and it was honestly a breeze, at least compared to the previous two days. We had the bottle press, the panel and concert was behind us, and we managed to get everything working properly. The only problem we encountered was transporting all of our equipment to the hotel room (shout out to the two awesome guys who helped us!) All in all, the con was a partial hassle on our part, but we survived with all our digits still attached.

After everything we decided that we might as well make the most of our last day in Baltimore and dine on some of Maryland's finest: 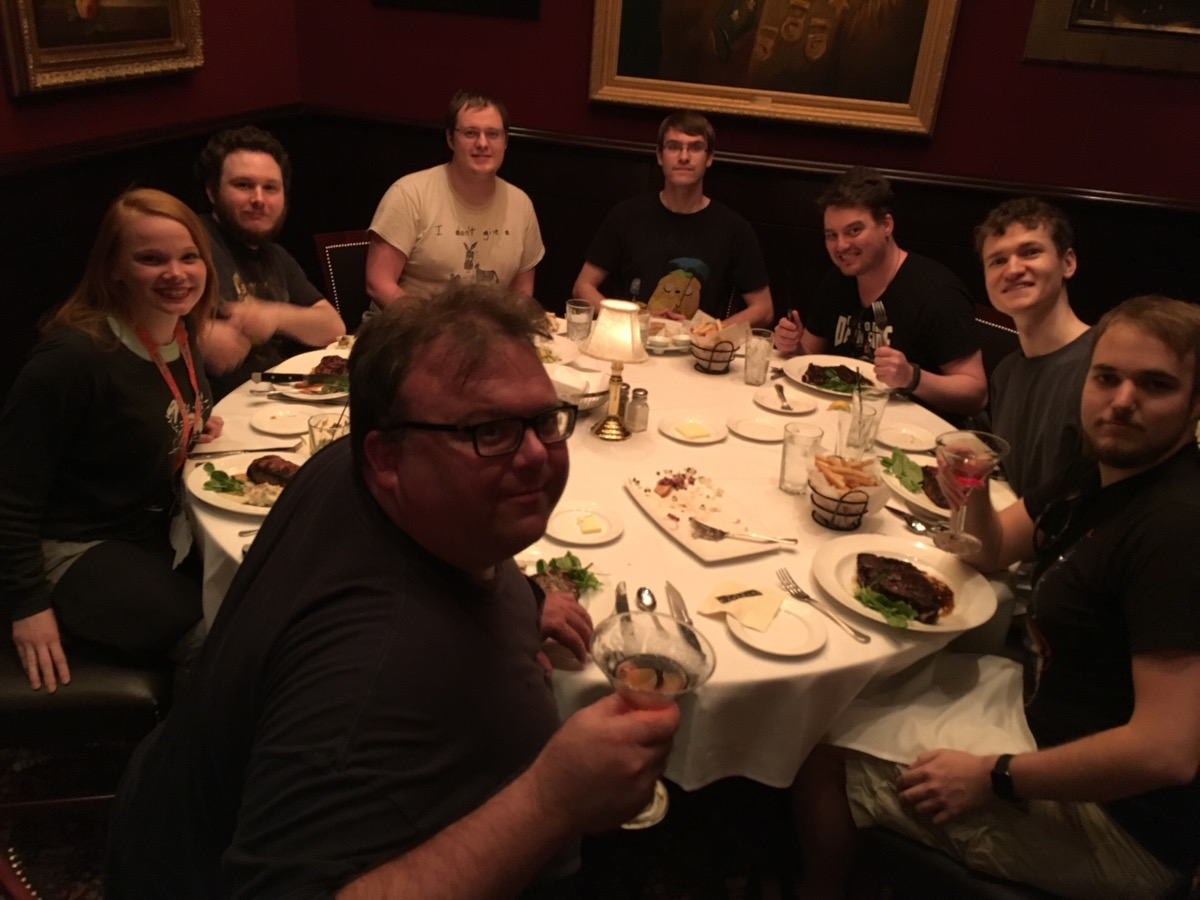 And then the bill came….. 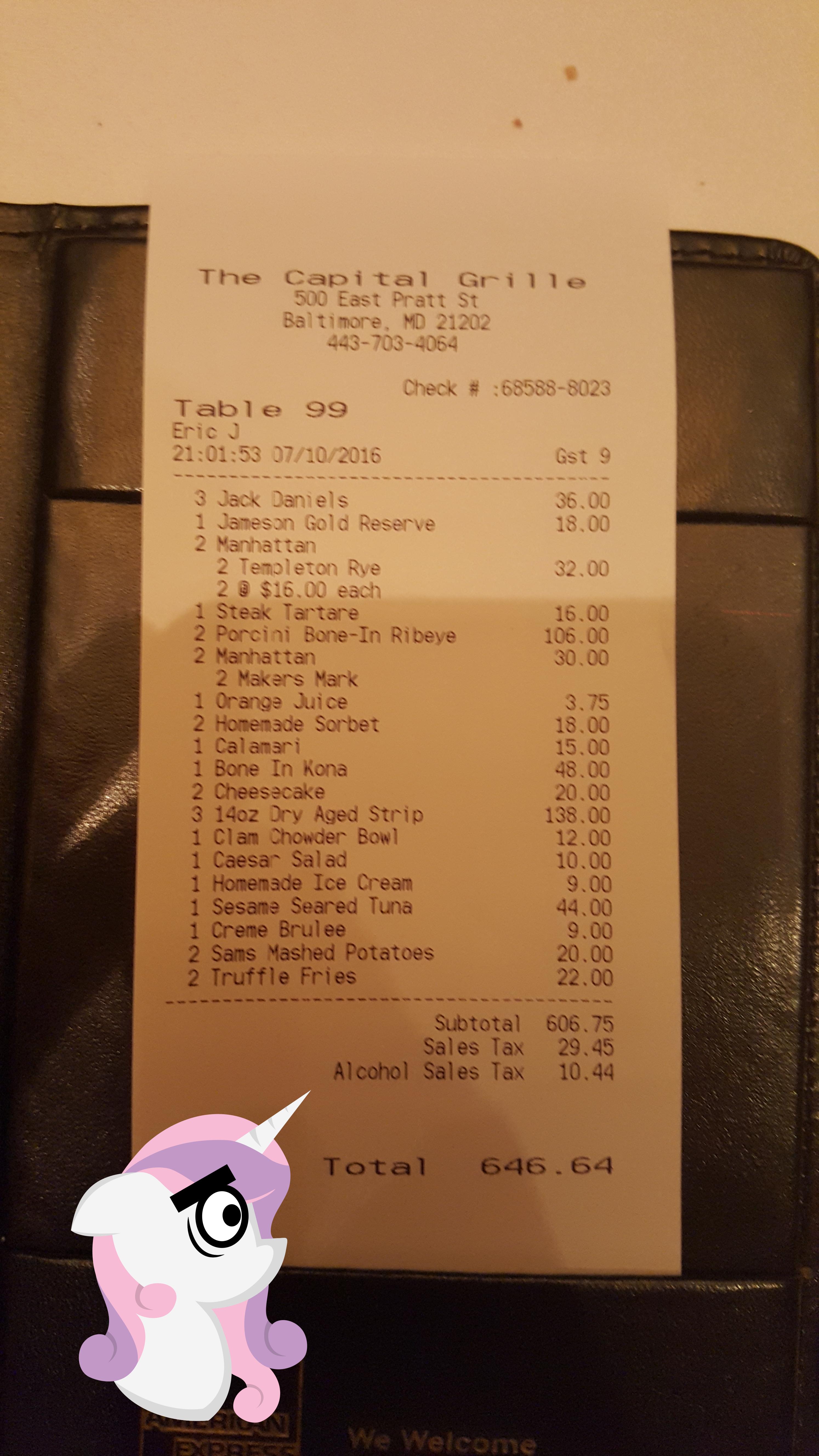 Despite the crazy price, the food was amazing, and the staff were some of the best we have ever seen. Our waiter actually offered to take the picture of us, just when we were about to ask! If any of you decide to go to BronyCon next year, we highly recommend hitting up the Capital Grille, even if you need to specifically save up for it.

As a disclaimer, none of the money used during our dinner was from the vendor sales!

Now, that is enough of us blabbering about the past. On to the very special thing you guys have been waiting for so patiently, the Wave 4.5 demo! 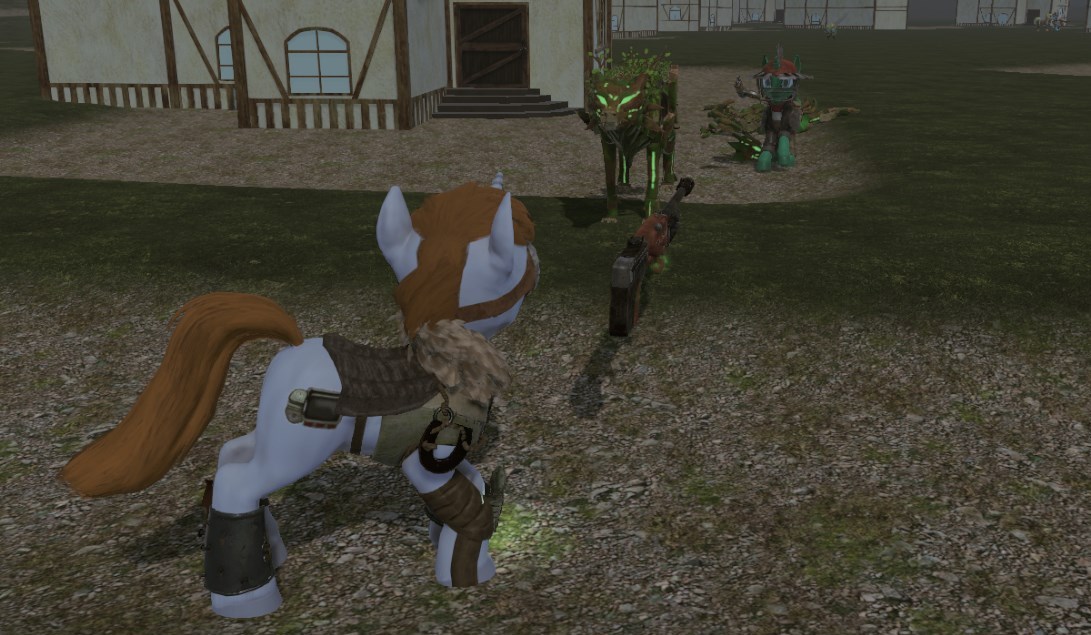 There is a lot of new content in this one, but just to name a few…

It is worth highlighting that when we say first iteration of Ponyville, we really mean it. It is going to be heavily changed already in the near future, such as the scale being made a lot tighter with a lot less extra/unused space. The biggest things you can take note of is the general layout and the like, pretty much everything else is subject to change.

Our in-game radio channel features songs produced by the Wasteland Wailers, our resident music team. As a special surprise, we are happy to announce that this release contains an exclusive copy of their newest song, called Dare Master, featuring Brittany Church, our singing voice of Velvet Remedy. We will release the track also on our regular YouTube channel and the Wasteland Wailers' SoundCloud but only after a week since the Wave 4.5 release date. We politely ask that you do not upload it in full/uncut. Snippets of it are fine or if it is being played in the background of regular gameplay, we simply ask that you do not upload the song specifically.

Unfortunately of course, as it is still very much pre-alpha, it is not perfect.

We have a very thorough QA process, so we are aware of most bugs. We are, however, interested in experiences with specific systems, so if you’re experiencing graphical glitches, hard crashes, unusually low performance et cetera, head over to the Crash Reports section of the forums.

Can I stream or record the game?

Are there mods or cheats?

Mod support, while never completely leaving our sights, is definitely not something we have focused on for this release. If you manage to get creative with Lua and DLL injections, though, we’d love to hear about it!

When’s the next demo??

We have plans, don’t worry! Expect to see more from us in the coming months. We’ll be returning to our regular blog-posting schedule as well, so there should be plenty of content to tide you over until then.

A big part of why we’re releasing these demos is to collect feedback from you guys, so we know whether we’re making the right choices and can adjust the game accordingly. After you’ve had a chance to try it out, click the ‘Feedback’ option in the main menu to open a link in your browser where you can tell us what you think.

​With the Wave 4.5 demo finally out, and con season officially over, all our focus is going to be on the Wave 5 demo. We will also be unveiling something else within the next few months, so please stay tuned.