Tales from the Script 43: Branches of the Conversation Tree

There are as many ways to build a dynamic conversation system as there are roleplaying games that employ them. In many many kind of games, these options are limited for many different reasons. The biggest one being: “Oh god. Oh god what have we done. This thing is branching all over the place and we have no idea how to reign it in. Somebody. Anybody! Mare-do-Well! HELP!”

The easiest way to prevent writer death via exhaustion is to limit the options the player is allowed to take by making assumptions about player reactions. These reactions can further be narrowed by also giving the avatar in the gameworld a simple personality. The player is then directed to roleplay this specific character, and determine what variation of said character they would enjoy being the most.

I mean, sure. You don’t want to work for these Cerberus guys. But Commander Shepard thinks it’s a swell idea! Now determine how annoyed Commander Shepard is about this situation. Roleplaying achieved! Now, if you’ll excuse Commander Shepard, she’s going to go back to crooning over this picture of Garrus she secretly took of him while he was doing calibrations. 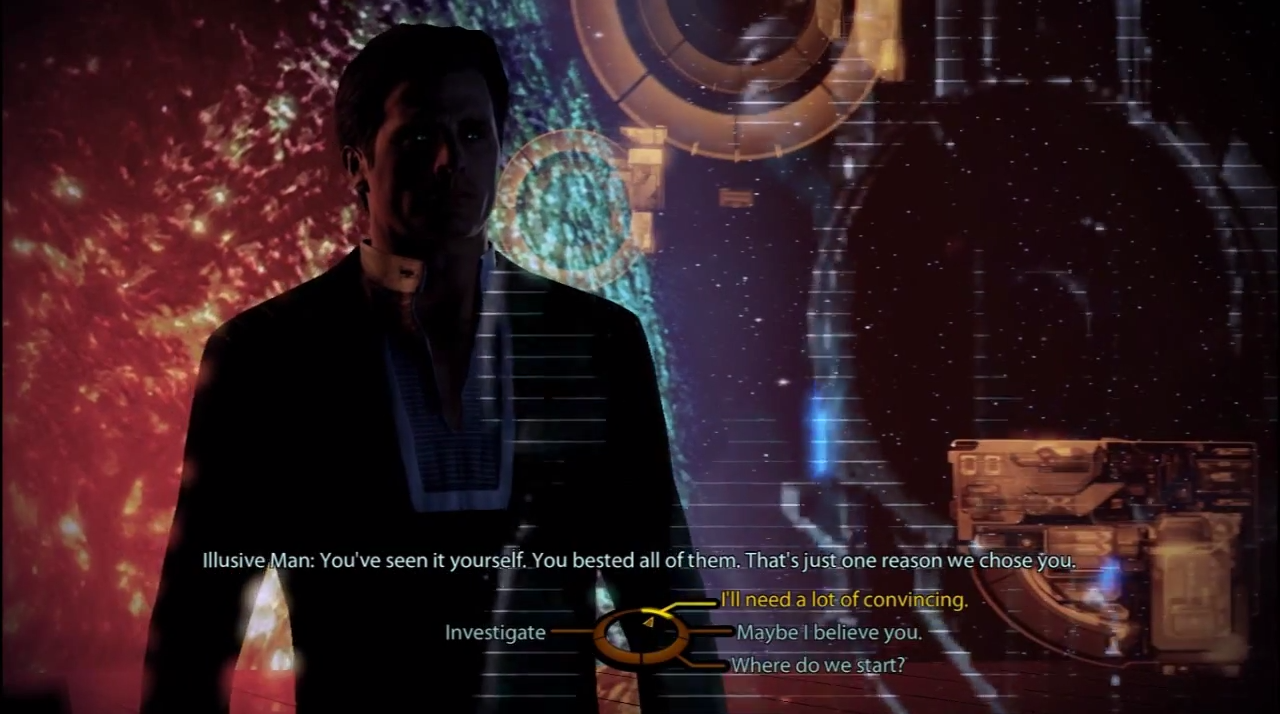 Bioware
(I bet Garrus will LOVE the fact that she joined a ruthless anti-alien terrorist organization!)

But in a Fallout conversation, the main character is as blank as a blank slate can get. A writer can no longer assume what a character might want to ask, but instead must guess what the general response would be in thousands upon thousands of perfect strangers. The player must be given roleplaying room in conversations to keep the experience immersive, and the range of options must cover as many reactions as possible. From emotional to logical, from silly to serious. Even the basic “yes-or-no” responses can spawn 3-5 varying options, including speech or other stat checks.

Where and when is the writer supposed to stop? Whats the difference between writing something that feels, to the player, natural or forced? And how does script team go about constructing these conversations?

Let’s start with some examples: 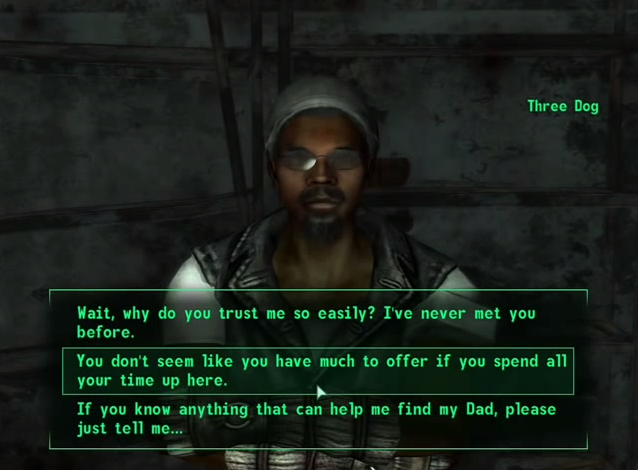 Bethesda
(I guess it’s ‘Three Dog’, but since when does Paranoid Jack trust any HUD information he gets?)

In his conversation, you get four to six speech options per branch of dialogue. And most of the time, they do have a good range on the emotional spectrum. It’s a linear conversation, but that’s not a problem if the player has the freedom to express themselves, or choose their own way to handle the situation.

But the player isn’t given what they need to feel like they have agency or control. If you’re trying to roleplay as someone who wants nothing to do with Three Dog, there’s no option here for you. If you’re looking to threaten Three Dog for the information you need, the game kindly ignores every mean thing you have to say in favor of Three Dog’s exposition and quest.

As Shamus Young says in the video where I stole this image from: “All you can do is suck up to this guy. You can’t threaten him or bribe him, in fact, one of the options is ‘oh please, I’m just looking for my father!’ … He wants you to do a job for him, and you can’t do anything except for accept the job or walk away. You can’t threaten him or bribe him, you can’t reason with him. There’s no other way around it.”

In fact, the only option to advance the conversation at a certain point is to pick “If you know anything about my dad, please just tell me…” Because you’re totally not a twenty year old man with mutton chops that is also clearly on fire. This pushes a massive amount of writer motivation directly onto the player, demanding they roleplay something specific in an environment that otherwise allows them more freedom.

Remember Benny from New Vegas? Of course you do, he’s like the game’s first antagonist. If you even glanced at New Vegas, you’d know about him. I’m sorry for asking such a dumb question. 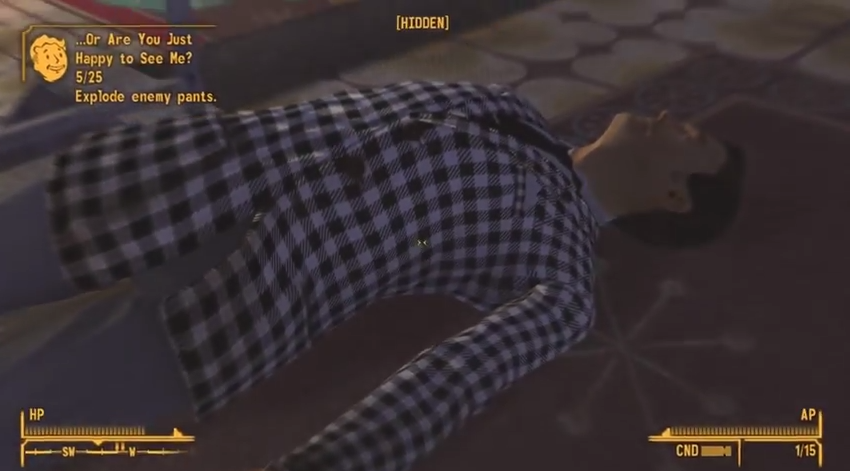 Bethesda
(You know. The last guy to ever suspect a stick of dynamite in his pants)

Since Benny is given such a major antagonistic place in the early-game plot, a lot of players will have had time to think about how their character would deal with Benny. In this specific instance, the players options cannot be limited. Their immersion will be broken the moment they’re not allowed to do whatever batshit insane idea that comes to mind.

Both of these samples were at the extreme end of being too limiting to the player, or difficult for the writer to consistently pull off. Somewhere between the two is a happy medium, a way that works for most conversations and quests in the game.

So now that we have examples, let’s show you how script team plants themselves a conversation tree!

So, given the current holiday, we should definitely focus this section on the most meaningful, most important and beautiful conversation in the whoooooole canon:

You see, on top of everything that we have to keep in mind stylewise, as a fan project we have another very large, important thing to keep in mind: We are working with a source material. There are plenty of people who are going to play this game who want it to be as much of an adaption as we can make it. But it must be an adaptation that allows for all the options and possibilities the original Fallout games provide.

THIS IS NOT THE FINAL DRAFT OR PRODUCT OR THING THAT WILL APPEAR IN THE GAME. MORE THAN LIKELY, WE WILL FIDDLE WITH THIS TREE AND CHANGE SOME STUFF ABOUT IT.**

So if you’ve forgotten or otherwise not read Fallout : Equestria, the moment LilPip steps outside of the Stable, she gets captured by slaver ponies. She’s not the only one they’ve gotten their hooves on, and her chain gang buddy is a fancy Tenpony Tower resident, Monterey Jack. 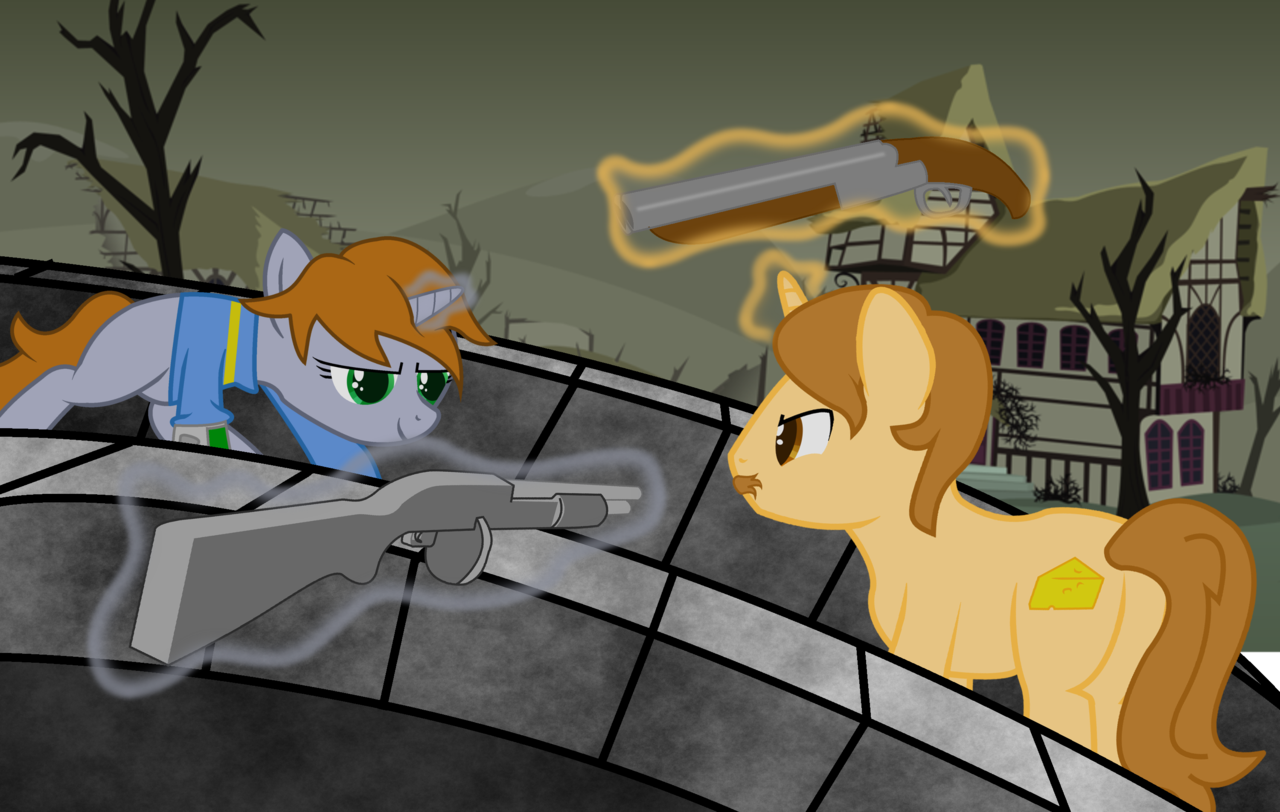 Monterey doesn’t say much during his time with LilPip. He tells her to be quiet offscreen, then doesn’t have a single other line until all the other slavers are killed in a tragic being-killed-by-LilPip accident. Afterwards, he has a brief scene where he casually turns a gun on our protagonist tries to rob her blind. This scene has two purposes in the story. For one, it teaches LilPip that looting corpses is A-OK! For two, also teaches LilPip that some people think looting alive corpses is A-OK!

While we want to re-create this as closely as possible, the entire purpose of the scene changes slightly when it becomes interactive. The player already knows bodies are magical funbox lootbags. Putting in a line about looting the bodies is a gentle reminder, not the horrifying remark LilPip takes it to be. So the main purpose becomes mostly about hostility in the wasteland, and the player’s reaction to it.

And the player must be given room to roleplay their reaction adequately. 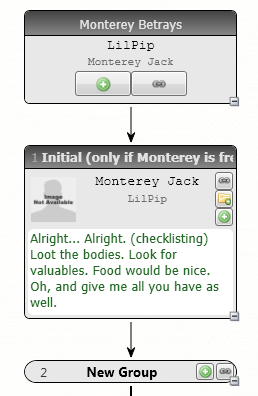 (Before you go and look it up, yes. The wording of his line is changed a little, conveying his actions in words instead of uh… actions.)

Now, you’re the player. You just got ganked by slavers, killed a good amount of them, and freed this guy out of the kindness of your heart. What would a reasonable reaction be? 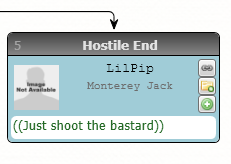 (Welp. That’s what you get for messing with the player, Monterey!) 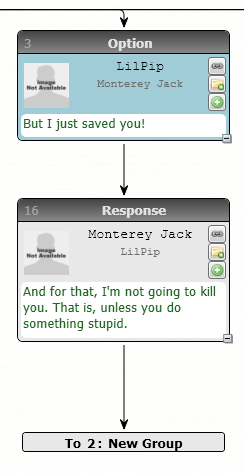 (Can’t talk about roleplaying without the need to roleplay Canon LilPip!) 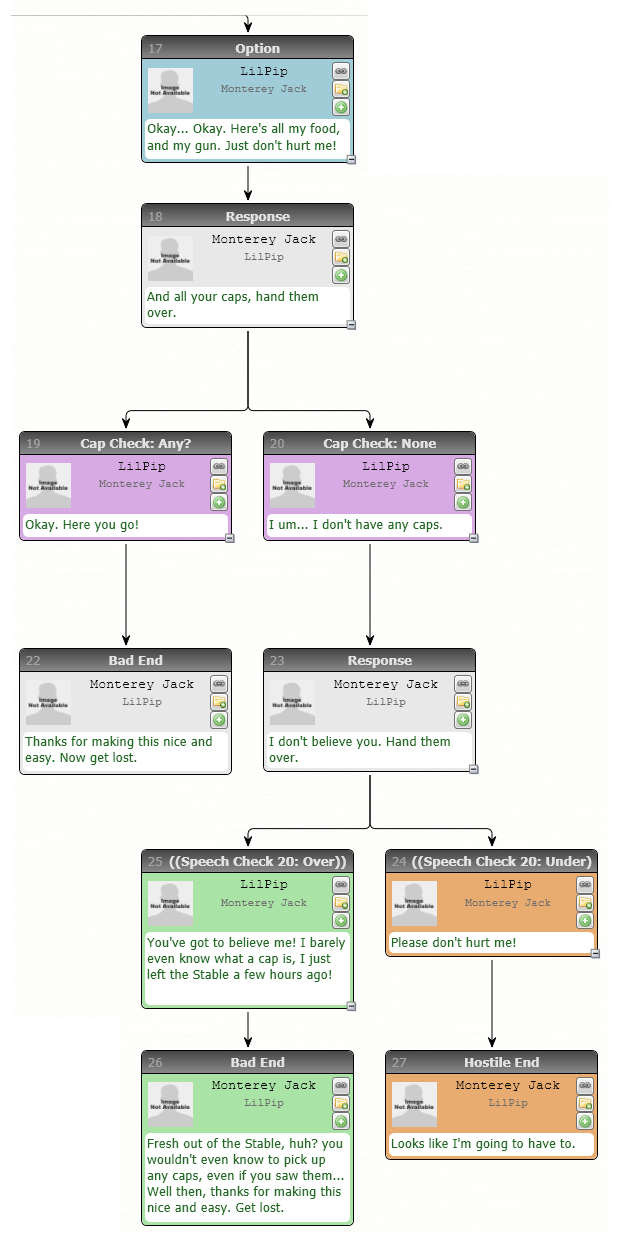 (Ah… the coward’s way out. I’m not dissing it, roleplaying a coward is actually a load of fun, especially when the game expects you to be some breed of badass.) 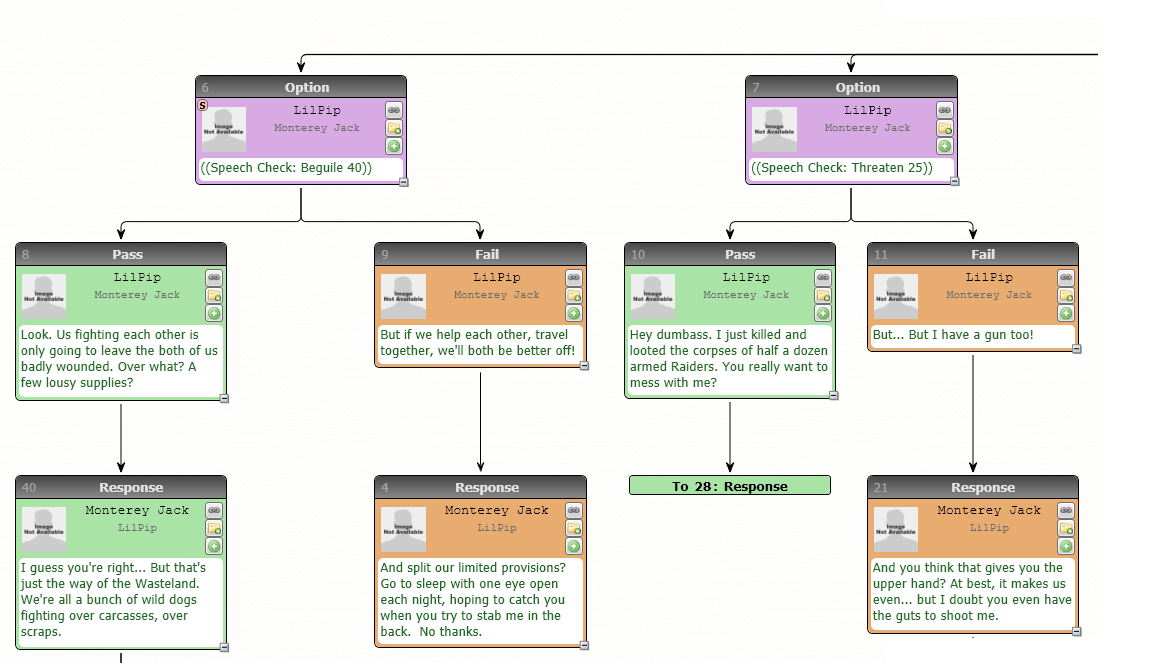 (More canon LilPip. and by that I mean more canon failures.) 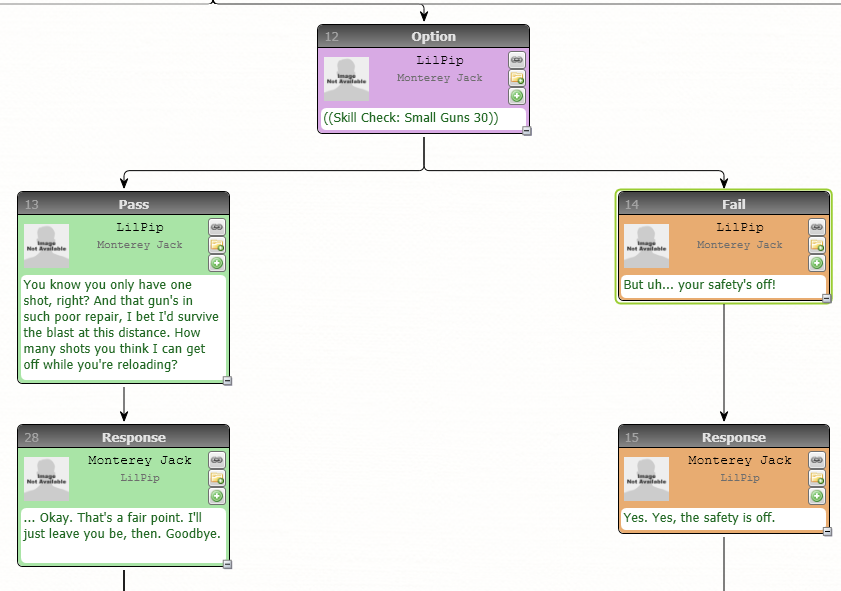 (Of course we’d have to include the canon victory. It’s such a wonderful line.) 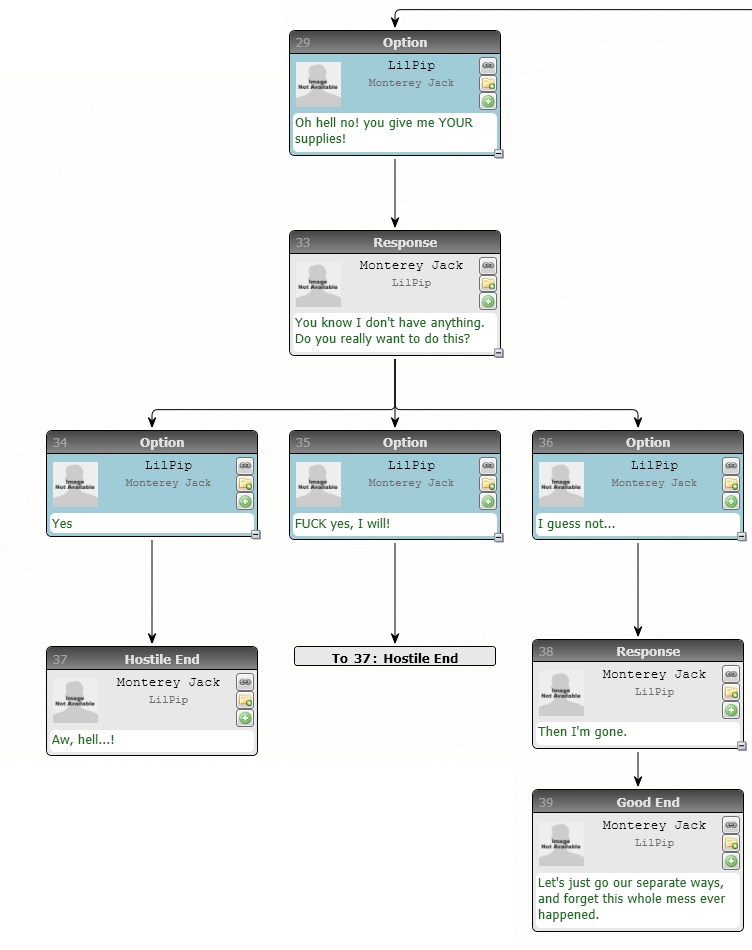 (Never forget DickPip. DickPip is the most important component to any chaotic stupid playthrough.)
(Also: This is after an unshown skill check. IndecisivePip over at the right is another result of that check. No need to point it out in the comments!)

So that’s eight ways to roleplay your way out of this situation. And mind, we also include the option to keep him chained up and mock his lockpicking skills. Or the option to never have this conversation, either by his death or you gtfoing from the fight. All of it in service to your personal reaction towards open hostility.

So I hope this article shows that script team is well aware of the style we’re trying to emulate, and well aware what makes the game fun for everybody who adores themselves some speech checks.