This week we are going to take a look at the pony model and how it evolved into the LittlePip we have today. So listen carefully, it’s time for uncle Nahka to tell you how little ponies are made...

When the project was started, the project management wasn’t exactly top notch. The design process was much more shallow than what it is nowadays and communication was one of the bigger problems the team had. Therefore some of the features and in-game models were designed very quickly with little to no documentation by only a couple of people and using the forum as the communication channel. While the results might be good quality, issues arise when the team goes through big changes and the new team members try to understand the decisions made by the old team. This was the case with the pony models.

Since the artist who came up with the design for the pony models is no longer in the team, we know only a little of the reasons that lead to the first design. The most important reason however did carry on with the design; The more practical body structure. The original plan was to not use the pony models we all have seen ported into Garry’s mod and Source FilmMaker, since the proportions were very impractical and they would have caused problems with the gameplay, equipment designs like battle saddles, and animations. The short torso of the Source ponies did not have enough room for proper equipment and combined with long legs even the basic walking animations would have been very problematic, not to mention that no one likes to play a game where half of the landing hits are headshots due to the huge head. The Fallout ponies were designed to not have these issues by using more realistic, or as some say, “more canine” proportions and combining them with the show style. You can see the original concept of the Fallout ponies below. 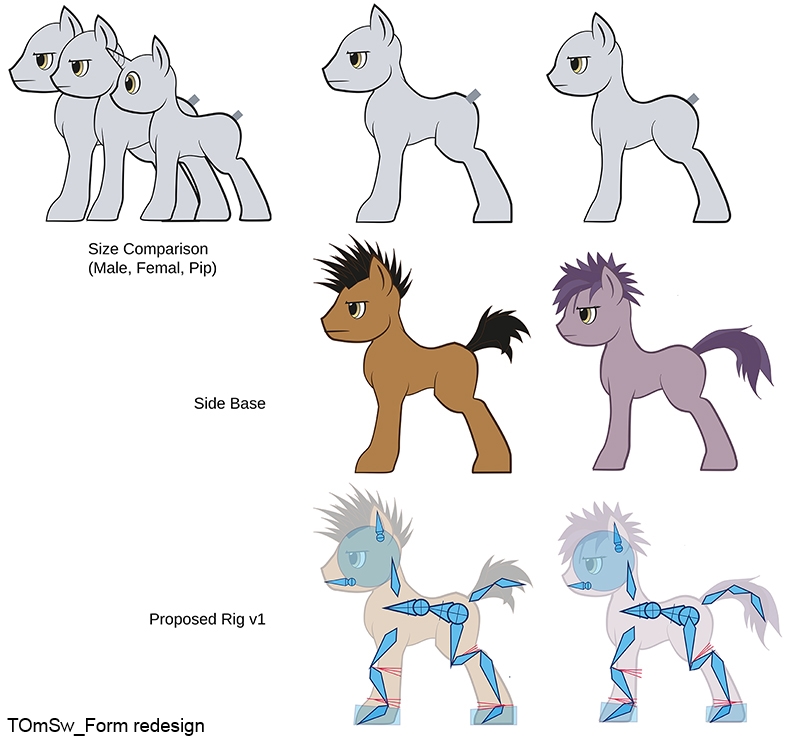 The pony concept was accepted, or at least we suspect so since the modelers started working on the first version of the pony model based on the concept. There were also rumors of multiple angles of the pony concept but we don’t know for sure since the only proofs we have of the design process are the concept sheet and a one and a half year old thread in the forum. It didn’t take long until the first pony mesh was done, however the textures and the skeleton were never completed at the time due to heavy changes in the team. You can see the first pony model below as it was before the team reorganization. 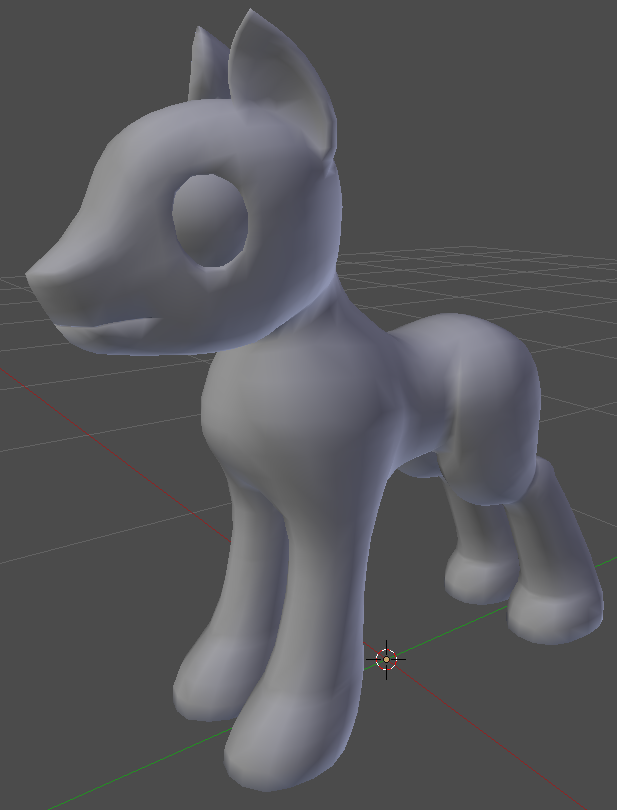 The model was untouched for months until the 3D team was almost completely replaced. Several issues were spotted with the help of fresh eyes, most of those issues being related to the fact that the design was too far from the show style. The model was, simply put, too canine in style.

In order to have the model resemble our little show ponies more, the proportions were reworked to look more show styled but still be realistic enough to not have any of the problems the original model was designed to solve. The head structure was also completely changed since the original model had eyes on the sides of the head and therefore would have looked really creepy, especially in situations like having a conversation. The topology of the face was also heavily modified to allow expressions and eyes were made from basic spheres that could be moved with bones as in Fallout 3. The pony got brand new UV envelopes since the original UV was mirrored and therefore didn’t allow asymmetric textures like scars or dirt.

At this point we also created a separate mare and stallion model in order to start trying to get the models into Fallout 3, and the mare model started getting more attention in order to prevent some of the problems with animations. Since Gamebryo uses the same skeleton for males and females, both models had to be modified to be used with only one skeleton which was a bigger problem with the less bulky mares. Both models were also broken down to pieces in order for them to work properly with Gamebryo’s character editing and equipment systems. You can see the latest second generation mare model below. 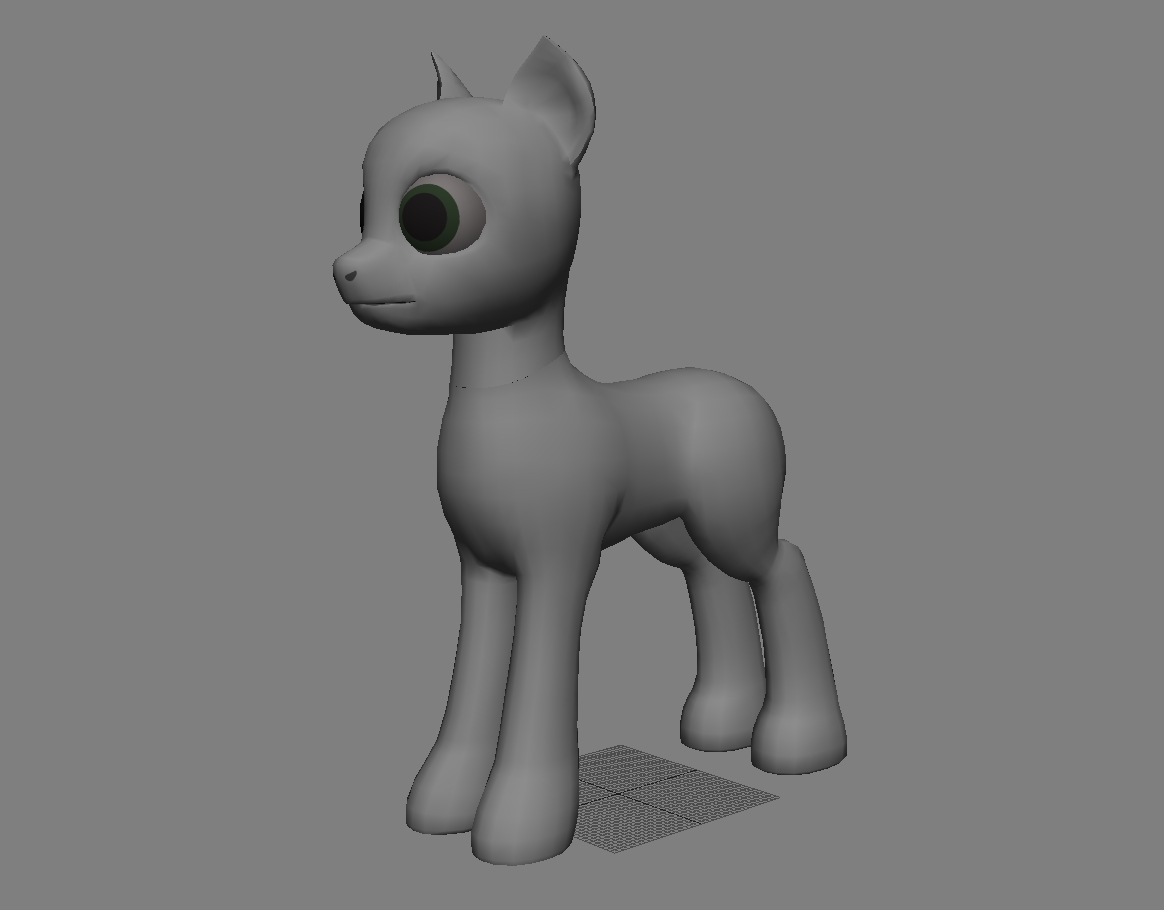 At this point we realised that we had landed right in the middle of the “uncanny valley” and crawling out of there would not be possible without heavy modifications to the model, so we started reconsidering our options. The two best choices were to stick with the model and keep modifying it until it looks good which could have taken several months of trial and error, or use one of the existing show styled models and modify it to fit our purposes. We decided to contact KP-ShadowSquirrel about using his models in the game and modifying them with his permission, because his models are some of the most well known pony models around. Nahka, the 3D team lead, also had over a year of experience of said models in the Source community (and he was the biggest supporter of them in the administration), so we decided to see if they could be any use to us.

The test model was successful enough to show us that it can be used as a base for the Fallout ponies, but it required heavy modifications in order to fit into the game (the easy ways are so boring). The proportions from the second generation were deemed good enough to be reused, so the new model was edited to match the size of the older model, and that’s everything these models have in common. On the other hand, the new model did have some drawbacks compared to the old model; It was not optimized for games, which could cause problems later in the project, and the eyes were not spherical meaning that they could not be controlled properly in Gamebryo without remaking them. Fortunately it was at this point when we started looking for new engine alternatives due to Gamebryo’s lack of cooperation. You can see the modified pony model below, as it is at the time of writing this. 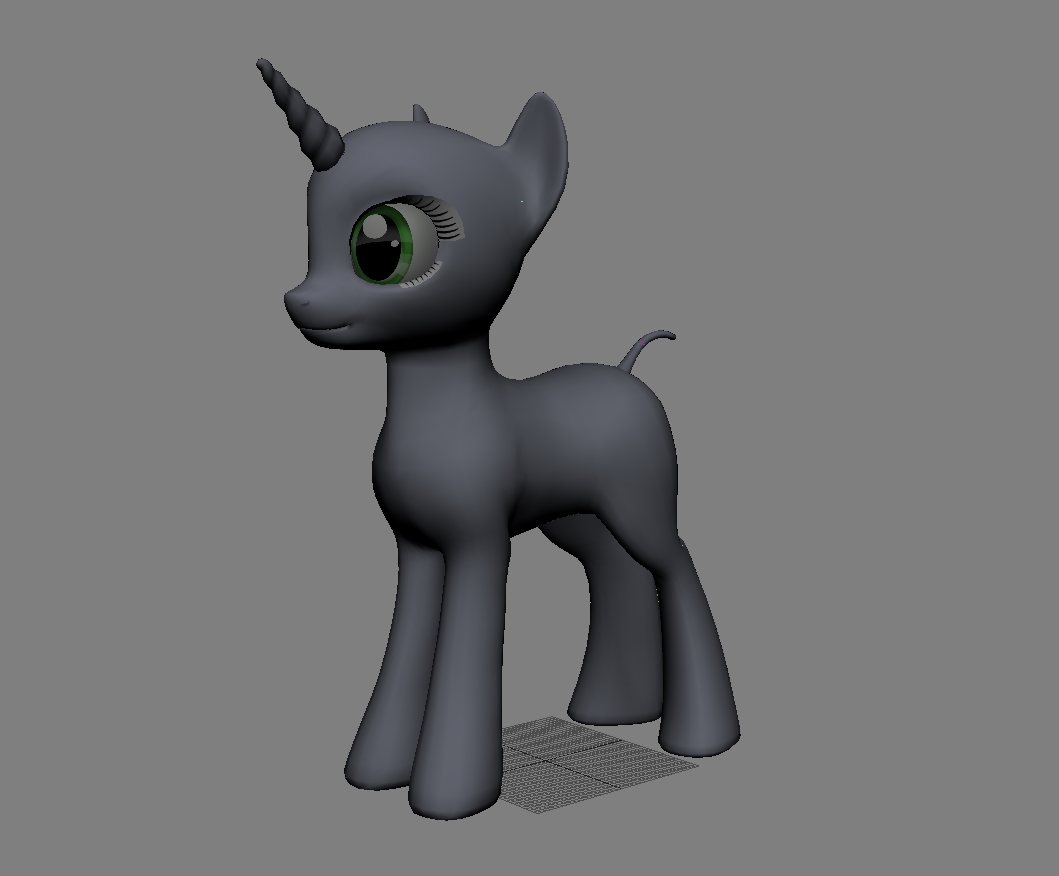 The switch to Unity gave us quite a lot more freedom with the model since we could design the way the model is handled ourselves instead of having to follow Gamebryo’s rules. For example, our models are not tied to a single skeleton anymore which means that we can make both genders more distinguishable, stallions having a more masculine body structure than mares. It is more work animation wise but it will pay off in bigger differences in animation styles and small details between mares’, stallions’ and even foals’ behaviour. We are also able to use different technologies for secondary animations like long hair or hanging cloth movement, instead of having everything looking starched stiff like in Fallout 3. Some design choices did carry on from Fallout though, for example the way how character parts like hairs and equipment are added on characters. Only the head model is kept the same through the game while the rest of the body is changed depending on the equipped clothing and player’s choice of style.

Another good feature in Unity is that instead of being stuck with the default shaders and just adjusting the settings, we are able to write custom shaders that allow better effects and even completely new features. The ponies eyes and coat are two good cases of using custom shaders with new features, like a normal detail map and specular offset for the coat, and eyes can be customized and moved with the settings or with scripts instead of using bones and different sets of textures. You can see Littlepip below as she is today, however note that the model and the shaders are still works in progress. Even after finishing the model and the shaders, our work with the pony models will not be over. Since the player is going to be seeing ponies 90% of the game, we need to make sure the model works without issues. New armors, weapons, animations and features are added all the time and the models need to work with these changes no matter what, so that means constant maintenance throughout the game production. The amount of work put into the model can be considered as a true test if it’s possible for a brony to get sick of seeing ponies...